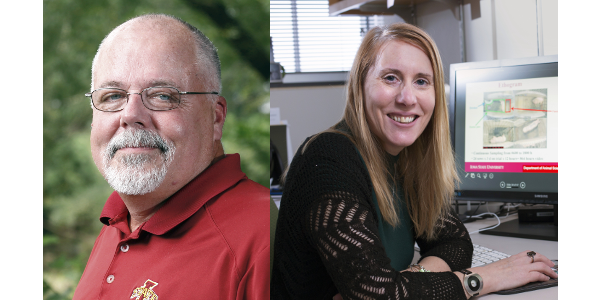 The Kolmer Award is named for a former college dean and honors faculty or staff who have made significant contributions to improving the welfare of Iowans through research. Lee Kolmer and his wife Jean established the award. Kolmer served as dean of the college for 14 years beginning in 1973.

Isenhart, a natural resource ecology and management professor, is known for getting research results to the public. He has built partnerships with landowners, farmers and agencies to improve water quality.

Since 1990, he and other Iowa State scientists have shown the benefits of conservation buffers. One result is central Iowa’s Bear Creek, which is a well-known conservation demonstration site and officially one of 12 National Showcase Restoration Demonstration Watersheds.

Along with teaching and research he advises the Iowa State Forestry Club and the student chapters of the Society of American Foresters and Pheasants Forever.

She began her career at Iowa State in 2005 after serving as director of animal welfare for the National Pork Board.

Johnson is an active member of the development team for the Iowa Farm Animal Care program and continues to offer services as a member of ISU’s On-Farm Evaluation Team, particularly in response to cases involving pigs.