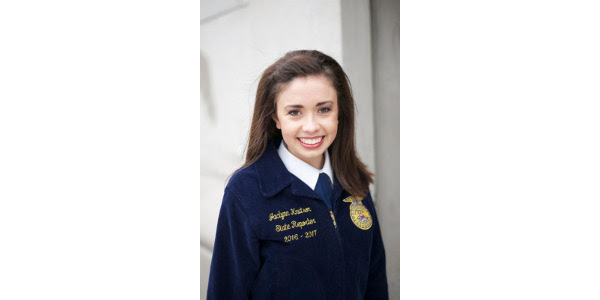 “I congratulate our three scholarship recipients for their dedication to their education, and thank them for their commitment to the Farmers Union organization,” says National Farmers Union President Roger Johnson. “We had an exceptional pool of candidates apply for the scholarship programs this year, and I am proud to see the enthusiasm for Farmers Union from the next generation of leaders in American agriculture.”

The $1,000 Stanley Moore Scholarship is awarded in memory of its namesake, a long-time Farmers Union member and visionary leader, including his roles as National Farmers Union (NFU) Vice President and chairman of the NFU Insurance Companies board.

Jaclynn Knutson is a seventh generation Centerville farmer (and third generation FFA member). She and her sisters raise a flock of registered Suffolk and Rambouillet sheep. She served as the South Dakota State FFA Reporter in 2016-17.

In addition to Knutson, the other recipients include: Caitlyn Becker of Flasher, North Dakota and Jane Umbriaco of Charlo, Montana.

Education is considered the foundation of Farmers Union’s success in all aspects of the organization.

The scholarship is made available annually to young Farmers Union members pursuing a degree in any field at a two- or four-year accredited college or university. The Stanley Moore Scholarship is also available for students attending technical school.

Applications for the 2018 scholarship awards will be available through NFUF in December 2017.

More information about the scholarships is available on the NFU website at www.nfu.org/education/scholarships.