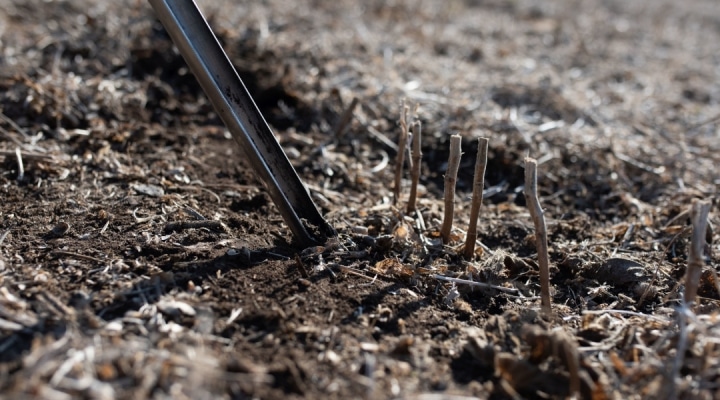 Experts with The SCN Coalition say while piggybacking on fall fertility testing is certainly practical, spring sampling for SCN before planting a soybean crop works fine too. (Photo Credit: The SCN Coalition)

WAUKESHA, Wis. — Concerns about lofty input prices and the limited availability of fertilizer this spring have some corn growers planning to plant soybeans back-to-back. Experts with The SCN Coalition want soybean growers to consider the potential economic and agronomic impacts that could have in SCN-infested fields, especially after many experienced warmer growing conditions in 2021.

“SCN reproduction is greater in hot, dry growing seasons, and many soil samples collected at harvest from field experiments in Iowa in 2021 have very high end-of-season SCN population densities,” warns Iowa State University nematologist Greg Tylka. “Planting an SCN-resistant variety is a soybean grower’s first line of defense. But in many fields, SCN has become resistant to the resistance because the same source of SCN resistance, known as PI 88788, has been used in about 95% of SCN-resistant soybean varieties for decades.”

Data from 15 years of variety trial experiments in growers’ fields in Iowa revealed that increased reproduction of SCN populations on PI 88788-resistant varieties can decrease yield by as much as 14 bushels per acre,1 which represents a 23% yield loss. That equates to about $190 per acre at current new-crop soybean futures prices. “When you consider that these studies were conducted in farmer fields with the traditional corn-soybean rotation, I shudder to think about the potential yield loss a farmer faces planting soybeans consecutive years in SCN-infested fields,” adds Tylka.

SCN soil testing was incorporated into the UW research, and SCN population densities were greater in consecutive years of soybeans versus rotating with a non-host crop like corn. “The negative effect of SCN on soybean yields is well documented, and protection against SCN is critical to maintain top-end soybean yield potential,” says Shawn Conley, one of the authors of the research and a UW professor of agronomy.

“These results were not surprising,” Conley adds, “and certainly reinforce The SCN Coalition’s recommendation to rotate SCN-infested fields with a non-host crop.”

SCN can be deceiving because soybeans typically look healthy above ground, despite the damage the nematode is doing below ground. “The best time to sample for SCN in your fields is in the fall after harvest or in the spring before planting,” says University of Kentucky plant pathologist Carl Bradley. “It’s important to know if SCN is present because the pest continues to spread and, without active management, population densities will continue to increase. It’s easier to keep low numbers low than to bring high SCN populations down.”

Bradley also reminds growers that SCN remains in the soil even when a crop is not present, and it is widely distributed. “If you planted soybeans in 2021, the odds are high that SCN was present in that field, and if soybeans are grown in 2022, SCN population densities will rise, resulting in a larger yield impact,” he says. “That’s why The SCN Coalition recommends rotating to a non-host crop like corn or wheat.”

Coalition experts also recommend soybean growers rotate SCN-resistant soybean varieties. If you grew a PI 88788-resistant soybean variety in your last rotation, you should next plant a variety with SCN resistance from Peking or PI 89772. If varieties with those sources of SCN resistance genetics are not available, talk to your crop consultant or seed salesperson about growing a variety with PI 88788 SCN resistance that is different from one that was previously grown. There is some evidence that rotating among varieties with PI 88788 resistance slows down SCN’s buildup on the resistance.

University of Missouri plant pathologist Kaitlyn Bissonnette says nematode-protectant seed treatments are another tool that can help control SCN numbers early in the growing season. “The life cycle of SCN begins with the adult SCN female in the soil, which can produce up to 250 eggs per generation,” she says. “Depending on where you farm, there can be four to six generations of SCN per year.

“One reason to consider a seed treatment, especially if you are planting soybeans back-to-back, is to control nematodes early in the season,” says Bissonnette. “Seed treatments can have an impact on any of three juvenile stages: the unhatched juvenile, the hatching juvenile and the penetrating juvenile.”

University of Arkansas System Division of Agriculture plant pathologist Travis Faske says Southern farmers face different nematode challenges when considering growing soybeans back-to-back. “Based on soil sampling, we know southern root-knot nematode (SRKN) is the most common threat in Arkansas,” he says. “The Cotton Belt is associated with the highest population densities and distribution of SRKN.”

Faske recommends Southern soybean growers test soil every three to five years to determine which nematode or nematodes are present and to see if population densities have changed. “If your main threat is SRKN, there are a few varieties that offer resistance, and seed-applied nematicides are also popular to consider,” he says. “Managing SRKN is more challenging because corn and cotton are also susceptible hosts. Planting cotton varieties with SRKN resistance can help control population densities.”

How you and your advisor actively manage SCN will depend on where you farm. The SCN Coalition provides state-specific recommendations from university experts. You can also visit the educational “Let’s Talk Todes” video series to learn more about active SCN management and the checkoff-funded research that’s focused on bringing new tools to soybean growers in the fight against parasitic nematodes.

The SCN Coalition is a public/checkoff/private partnership formed to increase the number of farmers who are actively managing SCN. Our goal is to increase soybean farmers’ profit potential and realize higher yields. Partners in The SCN Coalition include university scientists from 28 states and Ontario, grower checkoff organizations, including the North Central Soybean Research Program, United Soybean Board and several state soybean promotion boards, and corporate partners including BASF, Bayer, Growmark, Nufarm, Pioneer (Corteva), Syngenta, Valent and Winfield United.