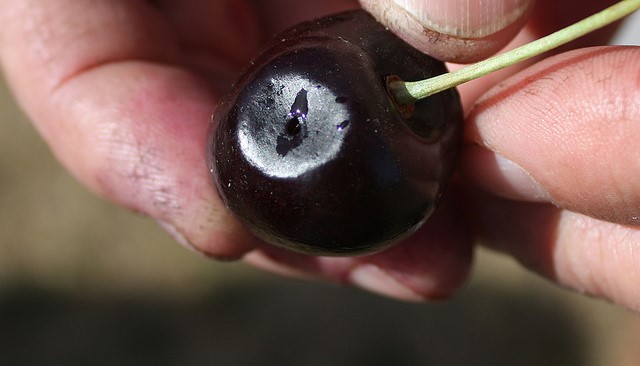 Spotted wing Drosophila, a vinegar fly native to East Asia and first detected in 2008 in California, has now traveled widely across the U.S., damaging berries, grapes, cherries, and other softer-fleshed fruit. Above: Damage in cherries. (Oregon State University, Flickr/Creative Commons)

COBLESKILL, N.Y. — To combat the spread of invasive species, especially those not well established in our region, educators and trained volunteers at Cornell Cooperative Extension Schoharie and Otsego Counties (CCE) are identifying invasive species and providing control recommendations. The service is free and offered in partnership with the Catskill Regional Invasive Species Partnership (CRISP). Samples can be dropped off during regular business hours, Monday – Friday, 8:30 a.m. to 4:30 p.m., at the Extension Center, 173 South Grand St., Cobleskill. You may also email a clear photo along with your contact information to schoharie@cornell.edu.

Invasive species have entered the U.S. through various means, both accidentally and intentionally. Many of the invasive plants causing problems today, like Japanese knotweed, were originally imported as ornamentals. Global trading has also brought the entry of exotic species into the county. Zebra mussels, for example, arrived in the ballast water of ships. Spotted wing Drosophila, a vinegar fly native to East Asia and first detected in 2008 in California, has now traveled widely across the U.S., damaging berries, grapes, cherries, and other softer-fleshed fruit.

Although only a small percentage of introduced species are recognized as invasive, the damage is significant. Some species of concern in our region are jumping worms, spotted lanternfly, hydrilla, slender false brome, Japanese angelica-tree, Himalayan balsam and giant hogweed. If you think you have giant hogweed on your property, avoid physical contact. Call CCE at 518.234.4303 for more assistance.

For information about program and events offered by Cornell Cooperative Extension Schoharie and Otsego Counties, visit its website cceschoharie-otsego.org.

Cornell Cooperative Extension actively supports equal educational and employment opportunities. No person shall be denied admission to any educational program or activity or be denied employment on the basis of any legally prohibited discrimination involving, but not limited to, such factors as race, color, religion, political beliefs, national or ethnic origin, sex, gender/gender identity, transgender status, sexual orientation, age, marital or family status, protected veterans, or individuals with disabilities. Cornell Cooperative Extension is committed to the maintenance of affirmative action programs that will assure the continuation of such equality of opportunity.

Growing Clematis, the Queen of the Vines