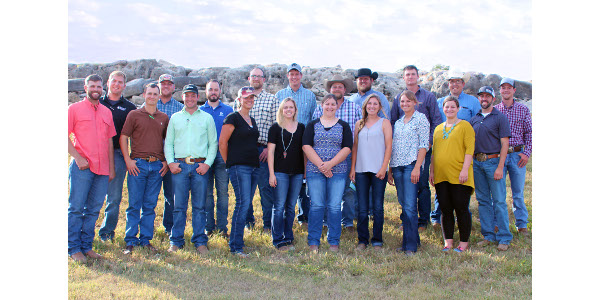 The first stop was at Cow Camp Beef, which is owned by the Brunner family and is comprised of a feedyard and seedstock operation. Past National Cattlemen’s Beef Association and KLA president Tracy Brunner took the group on a tour of the feedyard near Ramona. Kent and Nolan Brunner of Lost Springs manage the family’s seedstock business, which focuses on producing cattle that function efficiently and provide a high-quality end product. Stops also were made at Clover Cliff Ranch near Elmdale and Mundhenke Beef of Lewis. Clover Cliff ranch manager Spencer Harshman talked about their backgrounding operation, highlighting the animal health and feeding programs used to enhance cattle performance. John and Gina Mundhenke explained how they use high-quality genetics from proven bulls to produce calves that deliver the highest-grading carcasses possible.

During a visit to Noble Dairy near Plymell, manager Will Basham discussed the protocols used to manage 2,500 dairy cows and took the class on a tour of the facility, including the milking parlor. At Hy-Plains Feedyard, manager Tom Jones highlighted the new education and research center recently opened on-site. Jones said the facility will provide a controlled environment necessary to conduct science-based research and the capacity to educate through consumer outreach. The group also toured National Beef in Dodge City.

The final 2017 YSA session will be held during the KLA Convention in Wichita, November 29 through December 1. YSA members will have the opportunity to attend educational sessions and help form policy during council and committee meetings that will guide the association in 2018.

KLA is a trade organization representing the business interests of members at both the state and federal levels. Voluntary dues dollars paid by producers are used for programs that benefit KLA members in the areas of legislative representation, regulatory assistance, legal troubleshooting, communications and the advancement of youth.