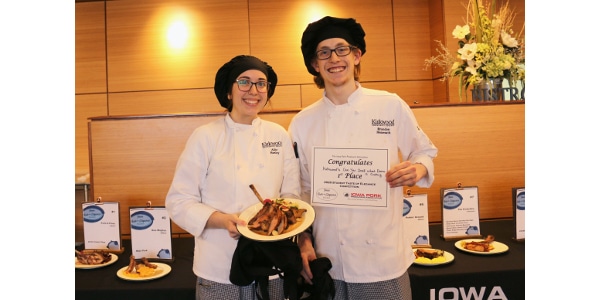 Competing teams, each consisting of two to four students, were challenged to prepare an entrée featuring a single serving of a crown roast of pork. Dishes were judged on taste, appearance and design.

“From a technical standpoint, they were really spot-on,” said Ken VanMilligen, corporate executive chef at St. Kilda Surf & Turf in Des Moines, one of three judges who provided immediate feedback, critiques and professional advice for the students. Other judges included Scott Bruhn, executive chef at ISU Dining on the Iowa State University (ISU) campus in Ames, and May Schaben, executive director of the Iowa Restaurant Association Education Foundation.

Hasley and Hemesath each were awarded $100 from IPPA. In addition, the Kirkwood culinary program received $750 for scholarships or educational supplies.

Third place went to Piggie Smalls, made up of Jordan Foster and Mario Portillo, both second-year DMACC students from Des Moines. Their “Un Savor Del Salvador” dish, inspired by Portillo’s nationality, accompanied the crown roast with plantain in a ring mold with black beans, a spicy crema and curtido (cabbage relish). They received $25 each and $250 for DMACC.

A crown roast of pork is made by forming a regular bone-in pork loin.

“It was clear that the students were challenging themselves creatively with flavor profiles and unique ingredients,” said Kelsey Sutter, IPPA’s marketing and programs director. “Some combinations were a home run while others needed tweaked, but it was all about the learning experience and professional feedback to help these students succeed in the future.”

The event is designed to inspire innovative and exciting ways for culinary arts students to use pork in their menus, measure their progress and practice working as a team in the kitchen.

Other schools with teams participating in this year’s contest were ISU and Iowa Western Community College in Council Bluffs. Each of the four participating schools received a $500 stipend for food and contest expenses.

The IPPA Student Taste of Elegance is open to any Iowa college with a culinary arts program.