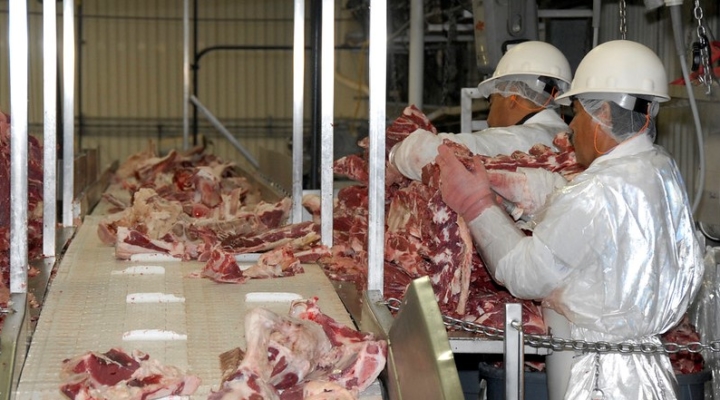 The Farm System Reform Act would, among other things, strengthen the Packers & Stockyards Act to crack down on the monopolistic practices of meatpackers and corporate integrators, place a moratorium on large factory farms, sometimes referred to as concentrated animal feeding operations (CAFOs), and restore mandatory country-of-origin labeling requirements. (USDA photo by Alice Welch)

“Large, multinational meatpackers, because of their buying power and size, are putting our food system at risk and harming everyone along the supply chain. We need to fix the broken system – that means giving family farmers and ranchers a fair shot and holding corporate integrators responsible for the harm they are causing,” said Sen. Booker. “We must immediately begin to transition to a more sustainable and humane system. An important first step is ending our reliance on huge factory farms and investing in a system that focuses on resilient and regenerative production.”

The COVID-19 pandemic has exposed many of the serious weaknesses in our food system. In particular, the hyper consolidation of our livestock and meat industry led to a near collapse of the supply chain in the early days of the pandemic. Consumers found empty shelves at their grocery stores, at least 259 meat processing workers died of COVID after their employers failed to provide safe working conditions, animals were cruelly killed, and farmers were left with no market for the livestock they produced. This broken system is not the result of inevitable market forces, but rather flows directly from the influence multinational meatpackers – who continued to make record profits during the pandemic – have over federal farm policy.

Economic concentration in agriculture has been hurting our country, especially rural America, for decades. The top four beef packing companies control nearly 85% of the market. The top four pork packers control 71% of the market. These companies have too much market power, and it comes at the expense of independent family farmers, who earn just 14.3 cents of every dollar spent on food.  Agricultural concentration hurts consumers too, who see higher prices, poorer quality, less innovation, and reduced access to food.  Making things worse, U.S.D.A. has continued to allow beef and pork products that are shipped to the U.S. and processed or repackaged here to be labeled “product of U.S.A.,” even when the animal was raised in another country. This allows multinational meatpackers to pass their imported meat off as American, further eroding fair competition and preventing shoppers from supporting local rural communities.

“For years, giant multinational corporations have been crushing competition in the agricultural sector and seizing key markets while regulators have looked the other way,” said Sen. Warren. “And the COVID-19 crisis has made it even easier for Big Ag to get even bigger and gobble up small farms — leaving farmers out in the cold and consumers facing higher costs and fewer choices. This bill is necessary to end the vice grip that Big Ag has over our farm economy, and to give our farmers, workers, and consumers real bargaining power in our farm and food systems.”

“Pennsylvania Farmers Union is proud to endorse this important and thoughtful legislation,” said Michael Kovach, PFU Vice President and Policy Director. “The environment, family farmers, consumers, our nation’s food security, and the animals we raise for food, are all affected positively by the direction the Farm System Reform Act points our food system.”

“The Farm System Reform Act tackles the root of our food system issues: consolidated corporate power,” said Joe Maxwell, fourth generation Missouri farmer and President of Family Farm Action. “By shifting federal support away from production models that only benefit corporate agriculture firms, the Farm System Reform Act places power in the hands of farmers and workers. Now is the moment to work together and build a better food system.”

“As Franciscans and Franciscan hearted people, we are called to follow the examples of Sts. Francis and Clare and care for all of God’s creation and its inhabitants,” said Jason Miller, Director of Campaigns and Development at Franciscan Action Network. “The Farm System Reform Act would be a big step forward in ensuring that we are in right relationship with the earth and one another. All human beings have dignity and worth and must not be left behind as profits continue to flow to the top. This is an issue of environmental, worker, racial, and immigrant justice and corporations can no longer view human beings as disposable. As Pope Francis calls on Catholics and people of goodwill to reject our ‘throwaway culture’ the Franciscan Action Network calls on Congress to act and pass the Farm Systems Reform Act immediately.”

“The FSRA represents a critically important step towards restricting the intolerable abuses of factory farming, while helping to create a more just and sustainable food system,” said Gene Baur, President and Co-founder, Farm Sanctuary. “We are proud to join with a diverse community of farmer, worker, environmental, health, and animal protection organizations in support of this vital legislation.”

“The COVID-19 pandemic exposed animal agriculture’s deceptive façade, revealing a broken factory farm system that is failing both people and animals. The Farm System Reform Act will help repair and bring compassion to our food system, protecting countless animals from unconscionable cruelty,” said Matt Bershadker, ASPCA President and CEO. “We thank Senator Booker and Representative Khanna for championing this necessary legislation to build a food system that values animals, people, and our planet —not just profit.”

Large CAFOs produce enormous amounts of animal waste and other harmful pollution, which are directly linked to environmental and health problems for farming communities across the country. These factory farms create runoff pollution that can contaminate waterways and drinking water. According to the Center for Disease Control and Prevention, large CAFOs produce as much as 1.4 billion tons of waste each year and are not required to maintain a treatment facility for livestock waste. The number of CAFOs have dramatically increased over the years and the steady growth makes rural communities vulnerable to environmental hazards and threaten the economic prosperity of family farms. The overuse of medically important antibiotics by large CAFOs has led to the generation and spread of dangerous antibiotic resistant bacteria. In 2019, the American Public Health Association urged federal, state, and local governments and public health agencies to impose a moratorium on all new and expanding CAFOs, and a 2021 study published in Proceedings of the National Academy of Sciences (PNAS) found that air pollution due to animal agriculture is responsible for 12,720 US deaths per year.

The Farm System Reform Act would:

A list of endorsing organizations for the Farm System Reform Act can be found here.

For more information on the Farm System Reform Act, please see the section by section here and the full bill text here.