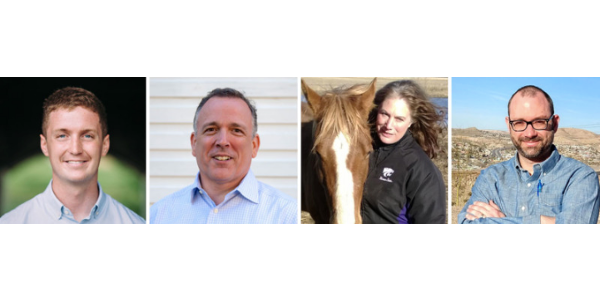 Austin Frerick, Rob Larew, Bonnie Lynn-Sherow, and Matthew Sanderson will explore the farm program's past, present, and future during the annual Kansas Farmers Union state convention in Lawrence on December 4 and 5. (Courtesy of KFU)

MCPHERSON, Kan. — The Road Ahead: Framing a future for agriculture, Kansas, and our communities is the focus of the 2019 Kansas Farmers Union state convention, December 4-5 at the DoubleTree by Hilton, Lawrence.

In addition to exploring what a truly progressive farm program would look like and how we can make it happen, conference sessions focus on the challenges and opportunities facing rural communities, the significant issues for the upcoming legislative session, new developments with industrial hemp, and generational differences relating to climate change.

Thursday morning is devoted to exploring what a truly progressive farm program would look like and what would need to be done to make it happen. Since it’s inception, the Federal Farm Program has taken many forms. Some would argue that over time it has hurt family farmers while others say that it has helped them. It has certainly morphed into a very different program with passage of the 1996 Freedom to Farm legislation when it ceased market-influencing inventory management.

This session intends to do an in-depth analysis of the program: its history, its impact on rural Kansas and rural America, the changes needed to bring prosperity to America’s family farmers, and how such changes could be brought about.

The session panel is comprised of unquestionably respected experts in their fields – Austin Frerick, Rob Larew, Bonnie Lynn-Sherow, Matthew Sanderson, and Tom Giessel – who will explore the program’s past, present, and what its future should look like, as we struggle with the problems in our country and the world.

Austin Frerick is the Deputy Director of the Thurman Arnold Project at Yale University, a newly established antitrust initiative between its business and law schools. He is currently working on a book calling for restoring the balance of power in America’s food system in favor of farmers, workers, and small businesses. The book is inspired by an article he originally published in The American Conservative entitled “To Revive Rural America, We Must Fix Our Broken Food System.” Earlier this year he organized the “Heartland Forum” in Storm Lake, Iowa, the first 2020 Iowa Caucus candidate event, which focused on economic concentration’s impacts on rural America.

Rob Larew advocates for family farmers, ranchers, and rural communities in Congress and the executive branch as Senior Vice President of Public Policy and Communications for National Farmers Union. He has over 22 years experience in Congress and USDA working on agriculture policy and communication. Most recently he was the staff director of the House Committee on Agriculture where he oversaw the committee’s efforts during the 2008 and 2014 farm bills. He previously served as the Director of Congressional and Public Affairs at the Food Safety and Inspection Service at USDA and worked as an agricultural aide to Rep. Collin Peterson and the late Sen. Paul Wellstone.

Dr. Bonnie Lynn-Sherow researches and teaches North American agricultural, environmental, Native American and Digital History and their intersections. She is the founding director of the Chapman Center for Rural Studies at Kansas State University where she and her students have been helping communities regain and restore their historical identities for fourteen years. Lynn-Sherow received the KSU Provost’s award for Engagement in 2018 and is the author most recently of Sauble: Stories from the Flint Hills, an oral history of the Sauble Ranch.

Dr. Matthew Sanderson is the Randall C. Hill Professor of Sociology, Anthropology, and Social Work and Professor of Sociology at Kansas State University. He is a social scientist with interests in population, environment, and development. His recent research investigates how social relations inhibit or allow natural resource conservation. His projects examine how culture influences perceptions of the science, knowledge, and information used to make decisions about agricultural adaptations.

Tom Giessel is a Pawnee County farmer who has been active in Farmers Union all of his life, serving as vice president of the Kansas Farmers Union for nearly two decades. He has also served Farmers Union on a national level as chairman of the policy committee, testified at congressional hearings, and participated in the American Farm Project. He currently serves as Honorary Historian for the National Farmers Union and as an advisory board member for Ogallala Commons, a community resource development organization.

Grassroots policy development takes center stage on Wednesday morning. Kansas Farmers Union has a rich history of working to protect and promote the interests of family farmers and ranchers by taking a leadership role in advocating for farming, ranching and agricultural interests across the state. Each year, members review past policy, propose and debate new issues, and adopt policy for the coming year.

Thursday’s luncheon explores the stories of Kansans who worked to stop forces of intolerance in “Four Horsemen and a Sage” with John Burchill. In 1938, a rabbi, two priests, and a minister drove across Kansas to challenge a senatorial candidate who supported anti-Semitic and Nazi beliefs. The group was dubbed “The Four Horsemen of Tolerance,” and they traveled from town to town explaining, “that this kind of hate had no place in America.” This program is made possible by Humanities Kansas.

The final session on Thursday takes a look at industrial hemp in Kansas. Farmers across the state were enthusiastic about opportunities with this new crop. With a season of research hemp production under our belts, what have we learned and where are we headed?

Online registration and the full conference agenda are available at kansasfarmersunion.org. For inquiries about registration, please call Kami at 620.241.6630 or Mary at 785.840.6202.