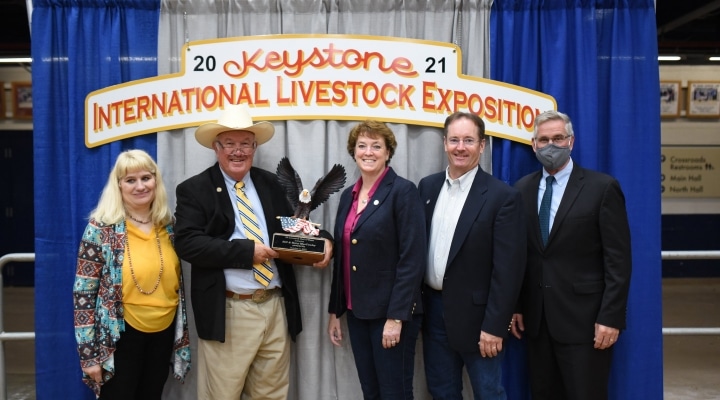 HARRISBURG, Pa. — The Pennsylvania Livestock Association awarded scholarships to six Pennsylvania college students and inducted Bill and Betsy MacCauley of Atglen, Chester, County the into the PA Livestock Hall of Fame during the opening ceremonies of the Keystone International Livestock Expo on Thursday, Oct. 7.

The MacCauleys have been dedicated sheep producers and volunteers in the 4-H and youth livestock programs for many years. They own and operate the largest purebred Suffolk flock in the United States.

Bill was born in Newtown Square and later moved to Atglen, where his family operated Breezeview Farm. He participated in FFA and 4-H and went on to graduate from Penn State with a degree in Agricultural Business Management. He also graduated from the World Wide College of Auctioneering.

Betsy grew up in Phoenixville, PA where she was an active 4-H member. She holds a bachelor of science in biology from Ursinus College and graduated with a degree in Biology, and met her husband when she purchased a sheep from his family.

The MacCauleys’ sons, Chris and Kyle participated in 4-H and FFA and the National Junior Suffolk Sheep Association. The family traveled across the country showing sheep at open and junior shows, garnering many awards, including numerous National Champions. During this time, Bill was on the United Suffolk Association board, serving as president multiple times.

The MacCauleys have served as leaders for the Chester County sheep clubs for 32 years and have supported the PA Farm Show Scholarship Foundation and been volume buyers at the livestock sale for many years. Bill has served as the auctioneer for the KILE Bred Ewe sale, the PA Farm Show Fleece Sale, Midwest Stud Ram Sale, Reno and numerous other sheep sales across the country.

KILE is one of the nation’s premier cattle shows. The event features more than 800 national competitors showing 3,000 cattle, goats, sheep, swine and horses, as well as high school and college FFA and 4-H teams from across the country demonstrating their breed knowledge in a national judging competition. The show also includes the Keystone Classic Barbecue Competition, a Kansas City Barbecue Society-sanctioned event to select the state’s finest culinary competitors. The show is hosted at the Pennsylvania Farm Show Complex and Expo Center.

KILE events are open to the public. Parking and admission are free.

For more about the show, including a complete schedule, visit keystonelivestockexpo.com