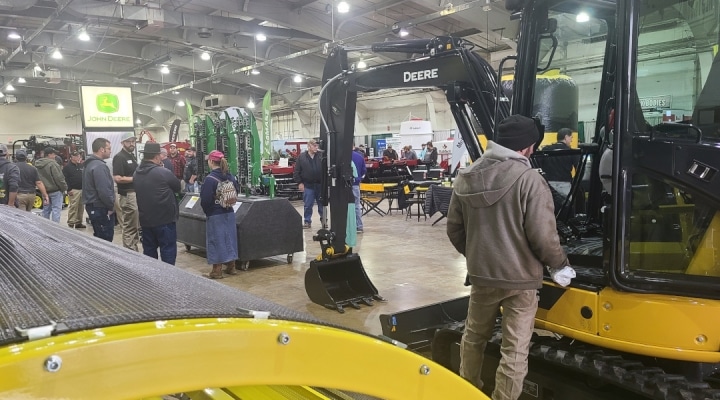 All major equipment lines were here.

YORK, Pa. — Every farmer’s calendar is full of notes and must-dos, and one of the events many farmers pencil in for January is the three-day Keystone Farm Show at the York Fairgrounds in York, PA.

The Keystone Show is the first farm show of the year, and it’s where farmers go to see everything ag, from the latest in equipment of all kinds and sizes as well as related farm products and auxiliary services.

Farmers seeking upgraded equipment or adding to what they have often take a break in winter to shop and compare. Driving from dealer to dealer is time consuming, but the Keystone Farm Show provides a one-stop experience for nearly every aspect of agriculture.

Bruce Button, vice president and general manager of Lee Newspapers Inc. and Lee Trade Shows, said a good indicator of show success is parking lots full of trucks with farm signage and vans full of attendees from out of state – both strong indicators that attendees are there to buy.

“We were extremely pleased with it,” said Button as he discussed the 2022 show. “Even though we had the show last year, it seemed like we were back to normal this year. We had good attendance – it was definitely a farm crowd.” He added that conversations he had with exhibitors indicated they were pleased with the number of potential buyers they interacted with during the show.

For farmers interested in the latest ag equipment and technology, nothing compares with seeing equipment in person and talking with people who can answer questions, and Keystone offers that opportunity. Many equipment dealers’ displays include streaming videos of their equipment in action, which helps break the ice and invites questions.

“That’s what the show is all about,” said Button. “People can meet with experts on equipment and ask questions that will help them make decisions about what they’re going to spend money on.” Button said while some attendees may have come with the intention of looking at specific equipment, the majority will visit the entire show. “They’re bound to find something they didn’t know they needed,” he said.

Last year, when many events were cancelled due to COVID-19, the Keystone Farm Show was one of the few ag events determined to continue business as usual. While new accounts were somewhat down last year, Button said this year’s show brought numerous potential vendors who were there to determine whether they’d exhibit in 2023. Many of those perusing the show saw their competition set up and talking with potential customers, which spurred them to commit to being present next year.

“Everything worked out great,” said Button. “We had great weather, which doesn’t always happen. Overall, we’re very happy with the turnout.” He added that a few exhibitors weren’t able to come to the show due to staffing shortages or delays in obtaining inventory, but he expects the show will be back to 100% in 2023. Each year’s show is planned a year in advance, and Button said plans for the next year are underway during the current show.

When the Keystone Farm Show first took place in 1998, it featured 83 vendors. Since then, growth of the show has been steady, including more than 500 vendors by 2020. While 2021 was riddled with numerous shutdowns, the show still did well. “This year we had around 437 exhibitors,” said Button, “and next year we anticipate the number right back up to 500 or more exhibitors.”

Button said part of the show’s success comes from the hard work exhibitors put in prior to the show. “What I like seeing from our exhibitors is more of them doing a great job inviting their customers to the show, either through direct mail, social media or other advertising,” he said. “That’s what a trade show is all about – everyone doing a little bit of promoting.”