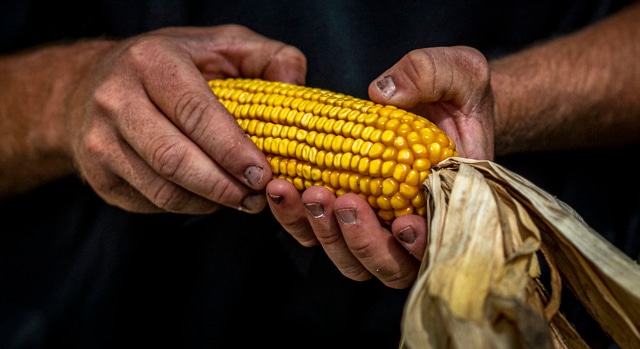 Genetic sleuthing revealed that the arrival of corn from South America may have played a role in the development of more productive varieties and greater consumption in Central America starting about 4,700 years ago. (U.S. Department of Agriculture, Public Domain)

SANTA BARBARA, Calif. — Earlier this year Douglas J. Kennett, a UC Santa Barbara professor of anthropology, demonstrated that maize, or corn, became a staple crop in the Americas 4,700 years ago. It turns out he was just beginning to tell the story of the world’s biggest grain crop.

In a new paper in the Proceedings of the National Academy of Sciences, Kennett and his co-authors report that by analyzing the genomes of ancient maize they are able to fill in some of the gaps in the 9,000-year-old history of corn, which was first partially domesticated in southwestern Mexico and spread through Central and South America fairly rapidly.

The researchers sequenced the whole genomes of three roughly 2,000-year-old cobs from El Gigante rock shelter in Honduras. Analysis of the genomes yielded a surprise: the millennia-old varieties of Central American maize were more related to ancient and modern corn varieties that were improved in South America, uncovering flows of grains between the regions.

“I was most surprised that improved maize varieties developed by Indigenous South Americans were reintroduced northward into Central America,” co-lead author Kennett said. “We could only know this through whole genome sequencing.”

The genetic sleuthing revealed that the arrival of corn from South America may have played a role in the development of more productive varieties and greater consumption in Central America starting about 4,700 years ago.

“We show that humans were carrying maize from South America back towards the domestication center in Mexico,” said Logan Kistler, curator of archaeogenomics and archaeobotany at the Smithsonian’s National Museum of Natural History and co-lead author. “This would have provided an infusion of genetic diversity that may have added resilience or increased productivity. It also underscores that the process of domestication and crop improvement doesn’t just travel in a straight line.”

First partially domesticated from teosinte, a wild grass, maize has only reluctantly given up the secrets of its long development. Genetic research, Kennett said, has been challenging because a scarcity of suitable cobs in an environment not kind to organic material. Researchers, however, caught a break in Honduras.

“Well-preserved maize is extremely rare in the Americas, but the El Gigante rock shelter has over 10,000 specimens to work with,” he said. “Most of these fragmentary remains date later than 2,500 years ago, and locating earlier material in the assemblage was challenging and required directly radiocarbon dating large numbers of maize cobs.

“Using this approach,” Kennett continued, “we did identify about 20 early cobs dating to between 4,300-4,000 years ago and we attempted to extract ancient DNA from all of these along with a set of cobs dating to between 2,300 and 1,900 years old. Using the best available techniques we were able to extract working genomes from only three cobs and all of these dated to between 2,300 and 1,900 years ago. This is the frustrating reality of ancient DNA work.”

While difficult, the research on maize has entered into a new era of discovery, Kennett said, because whole genome sequencing is revolutionizing our understanding of the past.

“We can now know much more about the biochemical processes involved in the domestication process and the sequence of domestication alleles that became fixed during the domestication syndrome,” he said. “It is also allowing us to track the spread of maize in much greater detail and how these changes altered the path of human history.”

Looking ahead, Kennett said that while researchers now know that improved varieties of maize spread from South America into parts of Central America, they don’t know when, precisely, it happened. Based on cob morphology, however, they’ve hypothesized it occurred by 4,300 years ago.

“Testing this hypothesis will require recovering earlier samples with well-preserved genetic material,” he said. “We also don’t know how far north these new varieties spread. This will require whole genome work on cobs of equivalent age farther north (e.g., Mexico). We also don’t know if people migrated north carry these newly improved varieties or if seeds simply passed through preexisting exchange networks. This will require working collaboratively with Indigenous populations in Central America to sequence ancient genomes to determine if the appearance of new varieties parallels the appearance of new populations.”

USDA allocates up to $10M to assist producers impacted by drought
April 14, 2021