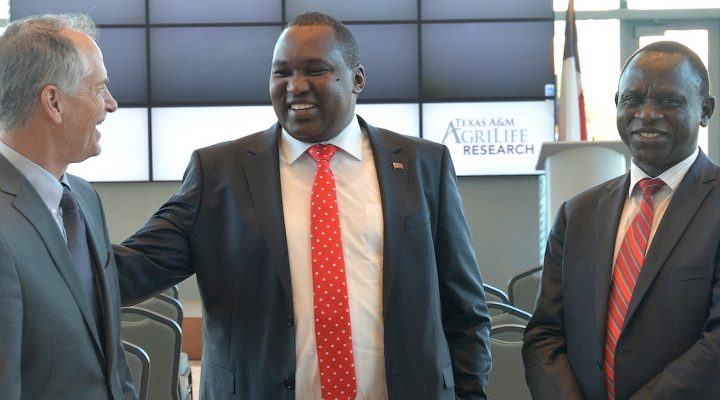 Aflatoxin is a toxin produced by a fungus that grows in some grain and oilseed crops.

This commonality was highlighted in opening comments by Dr. Craig Nessler, director of AgriLife Research, at a reception to host Kenyan parliament members including the Honorable Japhet Kareke Mbiuki and the Honorable Victor Munyaka.

“The wide geographic and climate diversity in Texas makes it suitable to perform research that is adaptable to most African climatic conditions,” Nessler said.

Maize is a key crop and a major food staple in Kenya. Aflatoxin contaminated maize impacts all sectors of agriculture including small-holder farmers to large scale commercial maize millers.

The week of meetings with Texas A&M AgriLife officials included a One Sample Strategy program demonstration, a Texas program launched to mitigate the threat of aflatoxin and protect the integrity of the grain market.

“The term one-sample comes from the concept of testing one sample correctly and using the results for multiple purposes including purchasing by grain elevators, crop insurance and regulatory oversight,” Herrman said.

Prior to implementation of the program, approximately 20 percent of the grain elevators were accurately testing for aflatoxin. However, since the program implementation in 2011, that number has increased to over 95 percent testing accuracy, Herrman said.

The visiting Kenyan parliament members said agriculture accounts for 70 percent of the country’s gross domestic product. In 2009, aflatoxin decimated maize crops and took the lives of Kenyan civilians. Their hope is to create a transparent connected marketplace that delivers aflatoxin safe-food and feed to all of Africa, beginning in Kenya.

“We want risk management from our villages, farmers on to storage through the entire market chain including food consumed by all Kenyans,” Munyaka said. “We are very proud and glad (to have this opportunity).”

The visit by Kenyan parliament members is an outgrowth of a high-level meeting involving members of parliament, government agency directors, industry representatives and AgriLife Research faculty. During the week, visits with Texas stakeholders included Texas Farm Burea and Texas Corn Producers Board officials in Waco, touring milling operations and hearing viewpoints on production and regulatory practices.

The visit builds upon the Aflatoxin Proficiency Testing and Control in Africa, Asia and the America initiative, also known as APTECA. The initiative was developed by spreading the co-regulation approach to managing aflatoxin risk developed by the Office of the Texas State Chemist, first in Kenya, then east Africa, then all of Africa and beyond.

While adoption of co-regulation has not reduced regulatory costs in Texas, Herrman said it has expanded oversight of aflatoxin risk from 1 percent using the direct regulation model to now testing approximately 30 percent of the state’s crop most exposed to the hazard.

According to officials, by adopting a similar approach in Kenya, millers have improved food safety for approximately 10 million Kenyans.

“The challenge exists in extending the reach of this program to all of Kenya including subsistence farmers, and throughout the rest of Africa,” Herrman said. “Based on the commitment by Kenya’s public and private sector leaders, I believe this approach to managing aflatoxin risk will spread throughout Africa and may eventually cycle back to the Unites States, where we will see other U.S. states and federal agencies address the serious challenges associated with mycotoxin adopted by our African counterparts.”

Key steps in the program’s success involved implementing a quality systems approach that included validating aflatoxin testing platforms to measure aflatoxin from 5 parts per billion to 1,000 parts per billion. Prior to the One Sample Strategy, the aflatoxin testing platforms had only been approved to measure up to 100 parts per billion by a U.S. Department of Agriculture grain inspection agency. This tenfold increase in testing capability greatly improves a regulatory agency’s ability to assess the public health risk. Test kit companies have been supportive of the APTECA program by offering their kits for sale in Africa at prices comparable to the U.S.and providing readers at no cost.

“This also reflects the serious commitment by the private sector, in this case U.S. aflatoxin test kit manufacturers, to offer affordable solutions to manage aflatoxin risk in Africa,” said Herrman.

The Texas program also introduced uniform sampling and sample preparation procedures, qualified analysts for testing accuracy, provided reference material to compare test results to a known standard, and State Chemist verification of participant test results. The visiting Kenya parliament members will share their observations during the second high-level meeting March 2 in Nairobi and draft legislation to formalize the adoption of a private-public partnership.