Home / Kentucky / Kentucky’s top Junior Chef team wins at Southeast Region competition
A new user experience is coming! We'll be asking you to login to your Morning Ag Clips account March 1st to access these new features.
We can't wait to share them with you! Read more here. 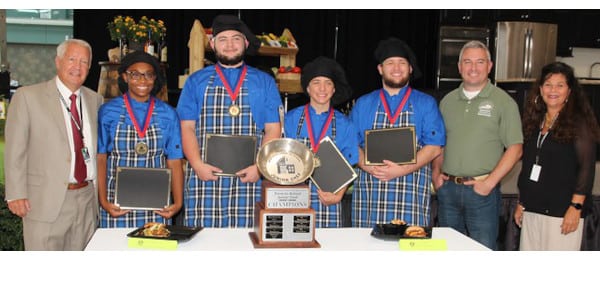 “Congratulations to Henderson County High School for winning this regional competition,” Commissioner Quarles said. “Winning at this level takes tremendous skills and we couldn’t be more proud that the trophy is coming home to Kentucky. Junior Chef is a wonderful learning experience for students to pick up valuable life skills and possibly even start a career in the culinary arts.”

The Southeast Region Junior Chef competition pits the champions of states in the southeastern United States in a cook off to demonstrate their culinary arts skills and use local agricultural food products. The competition, which was virtual this year, featured teams from Kentucky, Tennessee, South Carolina, and North Carolina. As part of a longstanding partnership with the Kentucky Department of Agriculture, each Kentucky team member will be offered a full tuition scholarship to Sullivan University.

Kentucky’s Junior Chef competition is part of the Kentucky Department of Agriculture’s Farm to School Program, which connects Kentucky schools to farmers to source local foods for school meals. As a result, children get fresh, nutritious local foods to help them grow up healthy and strong. Local farmers get another market for their farm products.

Junior Chef encourages participating students to learn how to cook by using local ingredients to prepare healthy meals while teaching students about agriculture, marketing, organization, teamwork, and community involvement. The Junior Chef season begins with district competitions in the spring and continues with regional matches to determine the teams that will advance to the state tournament.

The Kentucky Junior Chef competition is sponsored by KDA, Sullivan University, the Kentucky Department of Education’s School and Community Nutrition program, the University of Kentucky Extension Family and Consumer Science Nutrition Education Program, and the Southeast Regional Office of the U.S. Department of Agriculture’s Food and Nutrition Service.

Students who are interested in competing in the next season of Junior Chef must form their teams by March 2022. Students are advised to see their school’s food service director or consumer science teacher for more information.

To find out more about the Junior Chef program, contact Tina Garland, the KDA’s Farm to School Program administrator, at (502) 382-7505 or tina.garland@ky.gov, or visit kyagr.com/junior-chef.

Davis of Lexington elected to the National FFA Board of Directors