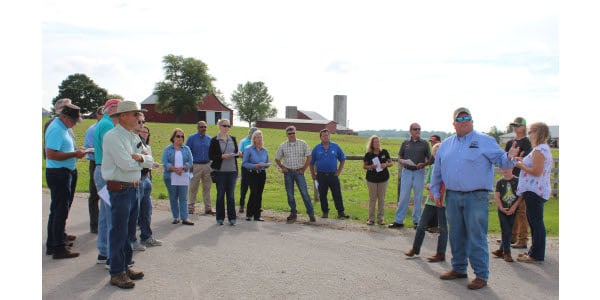 Caleb Ragland of Shady Rest Farms (gesturing) explained to the group how his operation utilizes hog manure from his confinement operation as fertilizer in his corn crop. He noted that the corn is then used to feed the hogs. (Courtesy of Kentucky Soybean Board and Association)

PRINCETON, Ky. — Farmers are the original conservationists. They are stewards of the land, striving for continuous improvement and endeavoring to leave the land better than they found it.

Unfortunately, farmers are also some of the most modest people around. They go about their chosen path without a great deal of fanfare, and some might say that, in doing so, the agriculture community doesn’t always do a great job of telling its story.

Farmers representing the Kentucky Soybean Board and Association, Kentucky Corn Growers and the Kentucky Small Grain Growers Association hosted a two-day “show and tell” farm tour for guests from the Kentucky Cabinet for Energy and the Environment earlier this week. Cabinet Secretary Rebecca Goodman was accompanied on the tour by Deputy Secretary John Lyons, Deputy Commissioner of the Department for Environmental Protection Amanda Lefever, and Executive Advisor Anne Marie Franklin.

The Secretary and her traveling companions were impressed by the in-depth understanding and implementation of complex conservation best management practices (BMPs) utilized by the farmers. The advanced technology employed by farmers was also of great interest. While Secretary Goodman was raised on a small farm in Scott County, she said that she now realizes that her family farmed to feed the children, and “what I saw today was on a completely different scale, and it boggles the mind.”

“The people I met today are smart, they are committed, and they are doing a good job,” she said, in comments made to numerous University of Kentucky research and extension personnel during an evening meeting at the Hardin County Extension Office. “We learned a lot today, and our minds are blown.”

Secretary Goodman said that she heard a lot about water, runoff, water quality, and sustainability, and that it was easy to see that the agriculture organizations work very well together.

Deputy Secretary Lyons was just as impressed with the farmers themselves as he was with the massive equipment and advanced precision ag technology. “Hearing terms like carbon sequestration, stewardship and sustainability being talked about by these farmers in everyday conversation was exciting to me.” Lyons has been with the Cabinet for more than thirty years and said that he didn’t know if those terms were even being talked about at the farm level fifteen years ago.

From “show and tell” about water quality sampling projects to solar panels powering grain systems to nutrient management of manure from a large-scale commercial hog operation, the Secretary and her team were able to see for themselves not only the science but the personal stories behind these farming operations and their practices.

Secretary Goodman said that her takeaway from the tour was that, “our goals are the same. We have learned so much, and we appreciate this behind-the-scenes look at what you do, and we know that what we do in Frankfort affects real people.”

The host organizations were pleased with the results of the tour, and especially with the relationships that were established. Relationships open doors to conversations, and having the Secretary of Energy and the Environment on these family farms, seeing the practices and technology that are being used to raise food, feed, and fuel in environmentally responsible ways is one of the best conversations that could result from such an event.