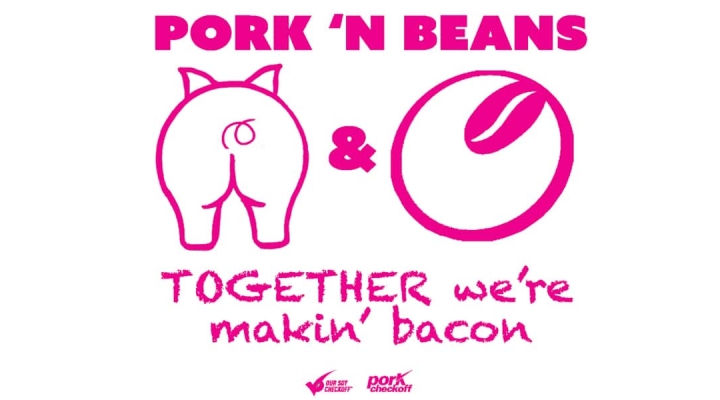 At this year's Kentucky State Fair, the Kentucky Soybean Board partnered with the Kentucky Pork Producers Association to illustrate the link between soybeans and animal agriculture, specifically the consumption of protein-rich soybean meal by poultry and livestock. (Courtesy Logo)

PRINCETON, Ky. — The Kentucky State Fair is an event that Kentucky agriculture looks forward to all year long, particularly since the advent of AgLand, which groups FFA, 4-H, Kentucky Farm Bureau, commodity groups such as the Kentucky Soybean Board, and other agriculture-related exhibits together in the South Wing. As the individual organizations began to plan their strategy for State Fair 2022, a partnership was formed.

Prior to AgLand’s inception in 2018, the Board partnered with the Kentucky Cattlemen/Kentucky Beef Council in a joint exhibit in the big red barn that was located in the lobby of South Wing A. Our collaborative spirit struck again this year, when the Board partnered with the Kentucky Pork Producers Association to illustrate the link between soybeans and animal agriculture, specifically the consumption of protein-rich soybean meal by poultry and livestock.

Several ideas and slogans were brainstormed until organizers found one that stuck, and PORK ‘N BEANS was born. To further underscore the partnership, the tagline, “TOGETHER, we’re makin’ bacon!” was added. Fairgoers played PORK ‘N BEANGO, which was filled with fun facts about the two commodities. From the perfect temperature at which pork is considered “done,” (that’s 145) to the number one oil used for frying in the U.S. (soybean oil, often marketed as vegetable oil), this interactive collaboration made learning fun.

In addition to the PORK ‘N BEANS partnership, the soybean exhibit held a barnyard scene that further illustrated the connection between soybeans and livestock. In addition to a pig, of course, the scene included chickens – which are big business for soybean farmers in Kentucky – a calf, and a lamb. The feed trough contained whole soybeans, soybean meal, and soybean hulls so that consumers who might not know the difference could actually see their food’s food. The farm scene brought in a number of fairgoers, many of whom had their photo taken with our animals.

This year’s Soy Cinema selection included the official debut of our new video, SOY Many Uses, which features Gracie and Jonathan Reynolds and shows some of the industrial uses for our renewable, sustainable crop. You can watch it now by pointing your cell phone camera at the QR code.

The SOY Many Uses video touches on a number of uses for soy, from its use in asphalt to roof rejuvenator to biosynethetic motor oil and more. Some of the products, such as Goodyear WeatherReady Assurance Tires and DEWALT bar and chain oil, were on display in the exhibit.

The most mobile display of all was found on the feet of soybean staff and farmer-leaders as they sported Skechers shoes, made with soybean oil in the rubber soles instead of petroleum. The varieties of Skechers that have the Goodyear logo utilize the same technology as the tires, using renewable, sustainable soybean oil as the oil of choice for durability, traction, and flexibility when you’re on the move. Exhibit workers wore buttons that encouraged fairgoers to “ask me about my shoes!” which was a great way to start conversations about how soy touches every life, every day.

Visitors to the Kentucky Soybean exhibit were also treated to a display of photos of some of the farm families here in the Commonwealth that help supply protein. The Kentucky Livestock Coalition banner and photo gallery had fairgoers stopping to see just who it is that raises their food, and we were happy to help put faces of real families on display. With 98 percent of U.S. farms being family or individually owned, we think it’s important to remind consumers that farmers are real people.

The Kentucky Soybean Board supports youth in agriculture during the fair in a couple of ways. For one, we sponsor the Kentucky 4-H Foundation’s Country Ham Day. This year, more than 800 Kentucky youth participated in the country ham project, which begins in the cold winter months of January and ends in August at the fair, where the hams are judged by members of the Kentucky Country Ham Producers and the students present a 3-to-5 minute speech on the project.  Throughout the project, the 4-Hers learn about food production and how the country ham fits into Kentucky’s food heritage. The Board also helps to support the Championship Drive, which recognizes the best of the best from nearly 500 exhibitors and more than 1,100 livestock show  entries. 4-H and FFA members work all year with the hopes of being crowned as a class winner. After shifting from the Sale of Champions to the Championship Drive in 2018, more students are able to showcase their market goats, sheep, swine and steers.

Kentucky Soybean’s Education Director, Becky Kinder, said “the fair is fun for the attendees, sure, but our purpose in being there is education. I heard a number of people say ‘oh, I didn’t know that,’ and ‘I learned something new today!’ That makes all of the planning and hard work worth it. The State Fair is our best opportunity to get our message in front of a large number of general consumers, and I think this was a great year for education.”

Kinder noted that our organization’s large presence and impact would not be possible without the time volunteered by the farmer-leaders who help set up, tear down, and staff the 11-day exhibit.