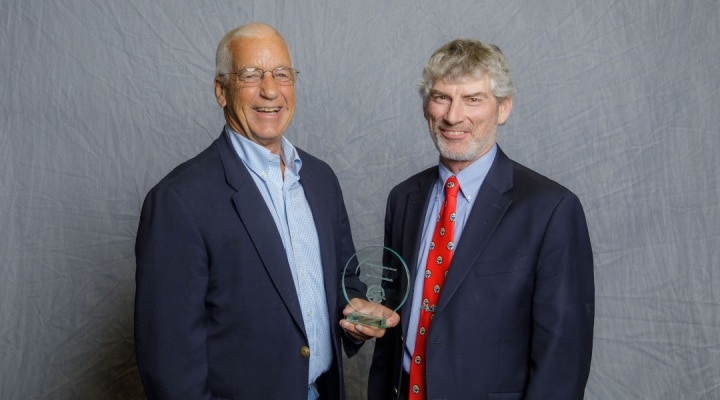 PRINCETON, Ky. — The Kentucky Soybean Association (KSA) presented its 2022 Distinguished Service  Award during the Kentucky Commodity Conference held on January 13. This award is the highest honor bestowed annually by the organization.

“This year’s honoree has been a Kentucky Soybean Association Lifetime Member since 2012, and he’s a farmer,” said outgoing KSA President Allen Pace. “Being a farmer isn’t a requirement for winning this award, but it sure helps. This farmer has represented the citizens of the 20th District as their state senator since 2011, and he’s represented his fellow farmers just as much.”

“Those of you who are active in politics know him well, because he has been a voice of reason and someone that the agriculture community can count on to understand what new laws and regulations could mean to our operations,” Pace added. “We can count on him, and we can call on him. Many of us in this room have his cell phone number, and he’s been just a phone call away when important issues have been moving in Frankfort.”

Hornback has spent a lot of hours away from his farming operation, because serving in the legislature – if you do it right –  is time-consuming. Being Chairman of the Senate Ag Committee takes even more time. Having an active farmer in the Senate has been a big asset to Kentucky’s ag community, and even though he has chosen not to seek re-election and will return to the farm full-time, the farmer-leaders of the Kentucky Soybean Association are certain that he will still be just a phone call away.

The recipient of the Distinguished Service Award is a closely-held secret, and Hornback was surprised to hear himself announced as the winner. He was in the audience to support his daughter, Amanda Gajdzik, and her husband Matt, who were recognized as one of Kentucky’s ASA Corteva Young Leader couples.

2022 Kentucky Ag Athletes of the Year