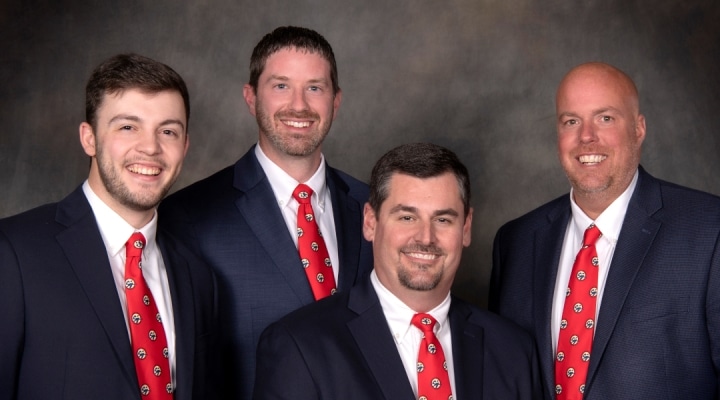 In its January meeting, the Kentucky Soybean Association (KSA) board of directors elected a new slate of officers for the year. Pictured, from the left, are: Secretary Jonathan Reynolds of Hickman County, Vice-President Adam Hendricks of Logan County, Treasurer Clay Wells of Union County, and President Brent Gatton of Muhlenberg County. (Courtesy Photo)

PRINCETON, Ky. — In its January meeting, the Kentucky Soybean Association (KSA) board of directors elected a new slate of officers for the year. Brent Gatton of Muhlenberg County was chosen to serve as President. He is joined by Vice-President Adam Hendricks of Logan County, Secretary Jonathan Reynolds of Hickman County, and Treasurer Clay Wells of Union County.

The Kentucky Soybean Association is a membership-based organization that focuses on policy efforts at both the state and national levels. KSA’s farmer-leaders travel to Frankfort and host legislators on their farms to promote open dialogue about issues that affect those in the agriculture sector. Those same farmer-leaders have also developed relationships with our lawmakers in Washington, D.C. and (under normal circumstances) travel to the Capitol multiple times each year to visit our Senators, Congressmen and their staff members to talk about direct and unintended consequences of legislation and to lobby for the best interests of Kentucky’s soybean farmers.

The association’s directors are elected to represent the farmers in their respective areas of the state by the farmer-members in those areas.