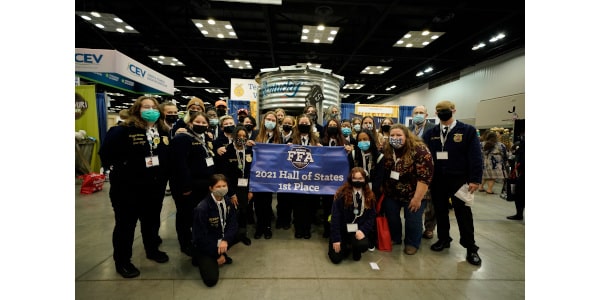 LOUISVILLE, Ky. — Kentucky FFA was well represented at the 94th Annual National FFA Convention, which was held October 27-30 in Indianapolis.  Over 60,000 FFA members, advisors, and guests attended the Convention, which is the largest youth organization gathering in the United States.

Mallory White of Union County was elected to serve as the Eastern Region Vice President for National FFA. White and her five team mates will each travel over 100,000 miles this year as they serve the over 700,000 members of the National FFA Organization.  She will also visit with agriculture and business leaders and government officials as she serves as an ambassador for the organization and the agriculture industry.  Mallory will take a year off from her studies at Murray State University to fulfill the duties of her office.  She is the daughter of Ryan and Brooke White of Sturgis.  Her FFA Advisors are Jeremy Hill, Emilee Black, and Kelsey Stevens.

Seneca FFA was recognized for having the best state display in the National FFA Convention Hall of States.  Their booth helped showcase the diverse aspects of Kentucky agriculture and promote our state to Convention attendees.  Seneca members designed, constructed, and staffed the booth which was part of the National Convention Expo.  Thanks to their efforts, thousands of FFA members from across the nation were able to learn more about Kentucky.

Spencer County FFA placed second in the Nursery/Landscape Career Development Event.  Members of the team were Thomas Fox, Jackson Tobbe, Aaron Alcorn, and Katelyn Tabor.  Aaron Alcorn was the sixth high individual in the contest.  The coach was Daniel Dunaway.

Matt Rowlette of Madison Southern was named as one of four national finalists for the American Star in Agribusiness Award.  During his years in FFA, Matt has built a successful lawn care business.  He began with 10 customers in 2015 and had over 70 residential and commercial clients in 2020.  In addition to mowing he now offers tree trimming and snow removal service to provide additional income in the off season.  Matt is the son of David and Sandy Rowlette of Berea.  His advisors are Kevin Anderson and Janna Clark.

Kate Burton of Royal Spring Middle School placed third in the Food Science Division I of the National Agriscience Fair.  Kate completed a research project and presented her research findings in an online interview with judges.

Jaylin Cox of Taylor County FFA placed fifth in the Employment Skills Leadership Development Event.  Jaylin completed a resume and job application as well as online interviews prior to traveling to Indianapolis.  She completed various rounds as part of the onsite event that included additional interviews and a networking activity.

Three Kentucky FFA members were selected as national proficiency award finalists in their respective areas meaning they were in the top four nationally.  Proficiency awards are based on a written application detailing the student’s accomplishments and learning related to his or her Supervised Agricultural Experience Program.  National Finalists complete an in depth interview with industry leaders as part of the selection process.

Ten Kentucky FFA members placed in the top twelve in the FFA Agriscience Fair.  They were:

The American FFA Degree was awarded to 91 Kentucky FFA members.  This honor is the highest award the organization can bestow on a member.

Sam L. Smith of Montgomery County and Arielle Evans of Trigg County represented Kentucky in the National FFA Talent.  Both Smith and Evans had the opportunity to perform on the main Convention stage.

For a complete listing of National Convention winners, visit https://www.ffa.org/event-results/