The report showed corn yields are expected to be up 7 percent from last year, soybeans 17 percent higher and burley tobacco yields down 5 percent. (USDA photo by Lance Cheung via Flickr)

LOUISVILLE, Ky. — The U.S. Department of Agriculture’s National Agricultural Statistics Service (NASS) released its crop production report Wednesday from the August Agricultural Yield Survey conducted at the beginning of the month. The report showed corn yields are expected to be up 7 percent from last year, soybeans 17 percent higher and burley tobacco yields down 5 percent.

“Crops are moving toward harvest in very good shape,” said David Knopf, director of the NASS Eastern Mountain Regional Office in Kentucky. “Condition ratings have been running above average for much of the growing season. On August 1, corn and soybean conditions were 5 to 10 points above the 5-year average.”

Soybean production for Kentucky is forecast at 99.4 million bushels, an increase of 28% from 2019. Yield is estimated at 54.0 bushels per acre, up 8.0 bushels from a year ago. Acreage for harvest as beans was estimated at 1.84 million acres, up 150,000 acres from the previous year. U.S. soybean production is forecast at 4.42 billion bushels, up 25% from last year. Based on August 1 conditions, yields are expected to average 53.3 bushels per acre, up 5.9 bushels from last year. Area for harvest is forecast at 83.0 million acres, unchanged from June but up 11% from 2019.

Kentucky farmers expect to harvest 24.0 million bushels of winter wheat during 2020. The expected crop for 2020 would be down 4% from the previous year. Growers expect a yield of 64.0 bushels per acre, down 12.0 bushel from 2019 and up 1.0 bushels from July. Farmers expect to harvest 375,000 acres for grain. Winter wheat production for the Nation was forecast at 1.20 billion bushels, down 8% from 2019. The United States yield is forecast at 51.1 bushels per acre, down 0.9 bushels from last month and down 2.5 bushels from last year. The expected area to be harvested for grain or seed totals 23.4 million acres, down 4% from last year. 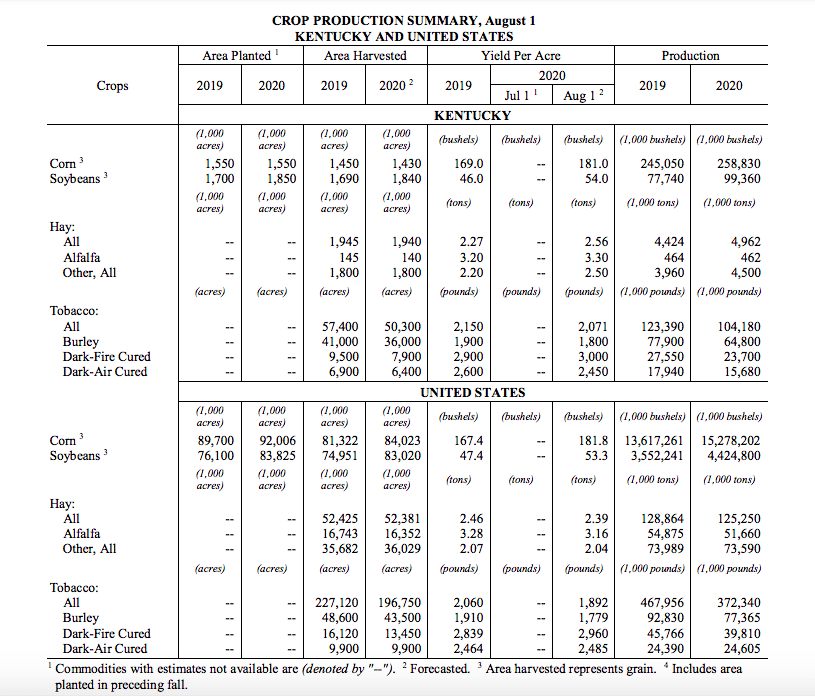 The next Crop Production report will be released September 11. All reports are available on the NASS website: www.nass.usda.gov. For more information on NASS surveys and reports, call the NASS Kentucky Field Office at (800) 928-5277.

Beat the barriers to early feed intake in young pigs