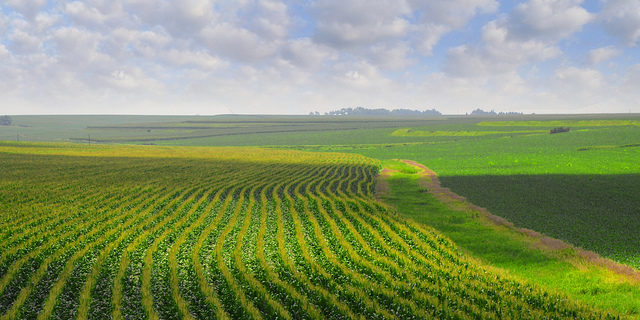 The U.S. Department of Agriculture's National Agricultural Statistics Service (NASS) released its crop production on November 9th, from the November Agricultural Yield Survey conducted at the beginning of the month. (Richard Hurd via Flickr)

LOUISVILLE, Ky. — The U.S. Department of Agriculture’s National Agricultural Statistics Service (NASS) released its crop production on November 9th, from the November Agricultural Yield Survey conducted at the beginning of the month. This month’s report shows continued possibilities of a record corn yield and record yield and production for soybeans.

“If realized, this would be the highest corn yield on record in the Commonwealth, surpassing the previous high of 172 bushels per acre in 2015,” said David Knopf, director of the NASS Eastern Mountain Regional Office in Kentucky. “Production will still be lower than last year due to the decrease in harvested acres. Corn harvest is starting to wrap up and should be complete in another week or two.”

“Forecasts still project a record high soybean yield and production,” Knopf said. “Yield dropped by a bushel from last month, but remains two bushels above last year’s record yield. Harvest is running slightly behind average and progress has been slowed by recent rainfall.”

NASS gathered data for the November Crop Production Report from the Agricultural Yield Survey earlier this month. The monthly yield surveys begin in May with the focus on small grains through July and shift to row crops beginning in August through the remainder of the growing season.

Inspectors OK 1st Ukraine grain ship but no sign yet of more
August 3, 2022