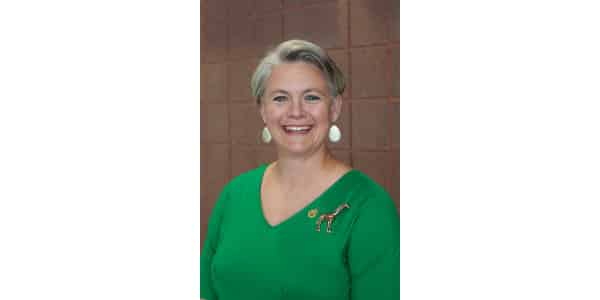 Misty Bivens, agriculture teacher at LaRue County High School in Hodgenville, Kentucky, was recently named the 2020 Kentucky Agriculture Teacher of the Year during a special recognition that was part of the Kentucky FFA Virtual Convention. (Courtesy of Kentucky FFA Foundation)

FRANKFORT, Ky. — Misty Bivens, agriculture teacher at LaRue County High School in Hodgenville, Kentucky, was recently named the 2020 Kentucky Agriculture Teacher of the Year during a special recognition that was part of the Kentucky FFA Virtual Convention.

Agriculture teachers from across Kentucky nominate one of their peers from each region for this annual award. A committee selects the Teacher of the Year recipient from the regional winners. All regional and state winners receive cash prizes and are recognized during the state FFA Convention.

Bivens has been teaching for 19 years at LaRue County, but she said in her Teacher of the Year application that she almost changed her major when she was in college. Her advisor dug in his heels and basically refused to let her switch – something she says she’s thankful for.

“I don’t regret one second,” she said. “I love it. If you don’t love teaching, you probably need to quit and find another job. I know that for me becoming an agriculture teacher was definitely the right decision when I chose a profession.”

Bivens has had a notable career. She has received local, state and national teaching awards, and has served her profession in a number of capacities, including as State President of the Kentucky Association of Agricultural Educators. She currently is a member of the Kentucky FFA Foundation Board of Trustees.

Bivens’ true impact, though, is in LaRue County. She has led many of her students to win FFA competitions and events, and has helped them prepare for life after high school.

“I know that every student won’t work in the agriculture sector,” she said in her application, “but the skills that are taught in agriculture should help them long into the future.”

Despite the many honors she has garnered over the years, Bivens says being named Kentucky Agriculture Teacher of the Year is special.

“To be 100 percent honest, when I found out I won, I cried a little,” she said. “This award was validation from my peers. I’ve put in several years and I’ve tried to do the right things along the way. I felt like this was very validating.”