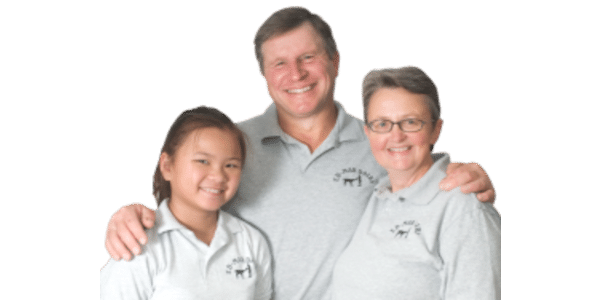 The Gibson family. (Courtesy of KDA)

“I’d be perfectly content if I could just milk these cows and keep the bills paid,” said Gibson, a fourth generation dairy farmer. “But with a small farm, that’s hard to do anymore.”

Gibson runs a diversified dairy farm operation that not only produces fluid milk, but also artisan cheese. While he launched a partnership with Cloverdale Creamery near Taylorsville eight years ago, he is now “trying to make ends meet” in a different direction.

“Our niche is agritourism,” he said. “I didn’t know if I would like it, but I’m not getting any younger and it’s a less physical way to keep things going.”

Hosting guests on his dairy farm for an interactive tour is helping him pay his bills and still maintain his farm.

“We’re so close to Cincinnati, which has more population than Louisville or Lexington. Before COVID, things were starting to roll. One or two school groups were coming out every week with a busload of 50 kids. I’ve gotta sell a whole lot cheese to make the same as I do from one field trip.”

This summer, Ed-Mar is hosting kids from daycares. But adults also make trips out to his farm for visits. A busload of adults from North Carolina, who had come to northern Kentucky to visit the Creation Museum in Boone County and the Ark Encounter in Grant County, stopped by recently.

“It’s starting to pick back up,” Gibson said. “I feel sure we will be pretty busy in the fall.

“When folks stop by the farm for a visit, I do my best to show them not only where milk comes from, but in today’s world, I want them to see that these cows are very well cared for. I tell folks all the time that these cows live better than a lot of people on this earth live.”

Ed-Mar has been one of the most visited locations on the annual Kenton County Farm Tour, which is scheduled to resume Sept. 18 after being cancelled last year due to the coronavirus pandemic.

“We’ll have 2,500 people stop by that day,” Gibson said. “We’ll sell cheese, make grilled cheese sandwiches, and hand crank ice cream – all for charity. That’s our chance to give back.”

Gibson is considering adding an events barn to allow Ed-Mar to host weddings, parties, reunions, retreats, and other group events.

“I’m thinking about moving an old tobacco barn here,” Gibson said, noting his other farm nearby, where he grew up, has several old barns that are about to fall down featuring hand-hewn beams and posts. “Those barns were old when dad bought the farm in 1950. They were probably 50 years old then.”

Gibson’s great grandfather was the first member of his family to own a dairy farm in northern Kentucky.

“My grandfather did all the work,” Gibson said, remembering him reminisce about the deadly Spanish Flu pandemic of 1918-20. “He was only one that didn’t get sick. He was only 10 or 11 (years old), but he took care of the farm and the family.”

Ed-Mar’s name is a combination of the names of Eddie Gibson and his wife, Marcy. Seven years ago, the 130-acre operation became the first dairy farm in Kentucky to install a robotic milking machine, which they nicknamed “Pearl” after Marcy’s grandmother. Pearl allows the cows to milk 24 hours a day, whenever they choose.

“What makes it work is the snack,” Gibson said. “They come to the robot to get their snack, and they get milked at the same time.”

Not having to milk cows twice a day has freed up time the Gibsons can spend with their teenage daughter, Maddie.

“She’s really into sports,” Gibson said. “We can go watch her play, and I don’t have to have somebody here to cover for me. It (Pearl) gives you flexibility, and honestly, it does a better job than I could ever do.”

Collar tags allow Pearl to remember each cow, the amount of feed she needs, and the exact location and size of her udder and teats. Each cow gets milked an average of three times per day, which has increased production by 20 percent.

Each day, the farm’s 50-60 cows produce 500-600 gallons of milk. Right now, most of Ed-Mar’s milk is trucked to a Dairy Farmers of America cooperative, where it has won multiple awards for quality.

Every month, one day’s worth of raw milk is sent to Cloverdale to be made into eight varieties of English-style cheeses using old-world recipes. Most of the finished product goes to Louisville-based Creation Gardens, which supplies more than 16,000 restaurants in 10 states.

Ed-Mar gets some of the cheese back to sell. The flagship flavor is Maddie’s Gold, a Double Gloucester-style hard cheese named after the Gibsons’ daughter. For those that are not cheese connoisseurs, there’s an American-style Kenton County Colby.

Gibson is committed to remaining a small-scale dairy farm, mainly because expanding his herd beyond 60 cows would require installing another expensive robotic milker.

“That’s not going to happen,” he said. “So we’ll continue moving more and more in the agritourism direction.”