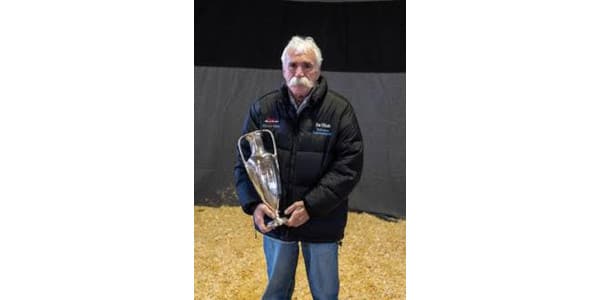 For the past two decades, Elliott has served as superintendent of the International Holstein Show at World Dairy Expo® and eight years as WDE Assistant Overall Superintendent. Elliott’s tenure as an Expo leader includes working with prominent dairymen such as W. Terry Howard, Bob Kaiser, Jim Crowley Jr., and Dave Bollig.

A 1978 graduate from the University of Guelph and its Ridgetown College, Elliott got his start working for Paperman Farm in nearby Woodstock, Ontario, Canada and then Doug Wingrove’s Allangrove Farm in rural Guelph. Next, the young Canadian headed stateside to California’s Pacific Coast where he worked for Marvin Nunes at Ocean View Farms, Windsor, California. Elliott and his wife, Kathy, eventually moved their young family to their own farm in Wisconsin.

As a farmer and breeder, Elliott excelled in his role as Holstein Superintendent at WDE. His connections with exhibitors spread across North America making him an asset to World Dairy Expo and throughout the stalling process at the annual event.

“Ken Elliott was a master at [stalling cattle and exhibitors],” shares former Expo Red & White Superintendent Bill Langel. “He knows everyone from coast to coast.”

Serving as the meeting place of the global dairy industry, World Dairy Expo brings together the latest in dairy innovation and the best cattle in North America. Crowds of 60,000 people, from nearly 100 countries, will return to Madison, Wis. for the 54th event, September 28 – October 2, 2021, when the world’s largest dairy-focused trade show, dairy and forage seminars, a world-class dairy cattle show and more will be on display. Download the World Dairy Expo mobile event app, visit worlddairyexpo.com or follow WDE on Facebook, Twitter, LinkedIn, Spotify, Instagram or YouTube for more information.