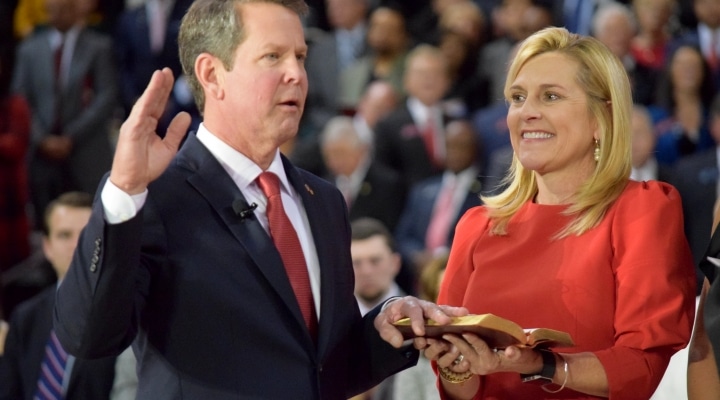 On Oct. 7, Georgia Farm Bureau President Gerald Long hosted Georgia Gov. Brian Kemp (pictured) in an installment of GFB’s “Digging In” webinar series, during which Kemp touted the state’s efforts to slow the spread of COVID-19, talked economic recovery in rural areas of the state and discussed projects in development that he expects will enhance recovery efforts. (photo by Georgia National Guard, Creative Commons/flickr.com)

MACON, Ga. — On Oct. 7, Georgia Farm Bureau President Gerald Long hosted Georgia Gov. Brian Kemp in an installment of GFB’s “Digging In” webinar series, during which Kemp touted the state’s efforts to slow the spread of COVID-19, talked economic recovery in rural areas of the state and discussed projects in development that he expects will enhance recovery efforts.

Kemp indicated there have been positive developments in the agricultural economy, though commodity prices are not as strong as they could be.

“There’s a lot of good there,” Kemp said. “We obviously need to see commodity prices rebound on the row crop side of things and hopefully at some point we’ll see that. I keep thinking that’s going to come any month and it hasn’t come yet.”

Georgia’s economic recovery overall is going well, the governor said, noting that the state’s unemployment rate of 5.6% was among the lowest in the nation and compares favorably against California, New Jersey, New York and Illinois, all of which had unemployment rates greater than 10%.

Kemp said economic development projects in rural areas of the state increased by 30% in the past year.

“The projects that we have that are either in rural parts of our state or in parts of our state that are directly tied to Georgia-based agriculture,” he said. “I’m really excited about what we’re working on. I’m working hard to get those deals done where we can get them announced and have them start happening.”

Kemp said that state revenues have mostly remained steady, and the anticipated cuts to the state budget were less than what many observers feared earlier in the year.

“We’re not laying off teachers around our state or other state employees. We’re open for business, you can get things done in state government,” Kemp said.

One business sector that has struggled in its rebound has been convention business. Georgia Farm Bureau, for example, canceled its in-person convention scheduled for early December on Jekyll Island, and similar steps have been taken by numerous other organizations that normally hold events at venues around the state. Kemp said this has had a ripple effect through other sectors, including transportation and hospitality.

“We’re just going to have to weather through the rest of the year I think. I hope that 2021 will be better,” Kemp said.

According to the Georgia Department of Public Health, the state’s numbers of confirmed COVID-19 cases have generally been declining since late July. Kemp said the state is succeeding in slowing the spread of the virus and thanked Georgians for doing their part.

“We’ve asked Georgians for many weeks now to do four things for fall, and those are to wear a mask, socially distance yourself, continue to use good practices, washing your hands and things of that nature, just adhere to the public health guidance,” Kemp said. “We just want to tell people to keep doing more of the same. Our case counts have continued to go down since our peak, our percent positive continues to go down, and our hospitalizations are down almost 67 percent.”

Kemp said the percentage of positive test results was between 6% and 7% on Oct. 7, down from more than 10% three weeks before, and that hospitalizations for COVID-19 patients had declined by two-thirds.

“We’ve been able to do all of this while schools have gone back in, our universities have opened up. We’ve seen high school football games on Friday nights in the community,” Kemp said. “So there’s a lot going on that wasn’t going on at the end of the summer. We’ve still been able to drive our numbers down. I feel like we’re in great shape right there.”

Caring for our community during critical times