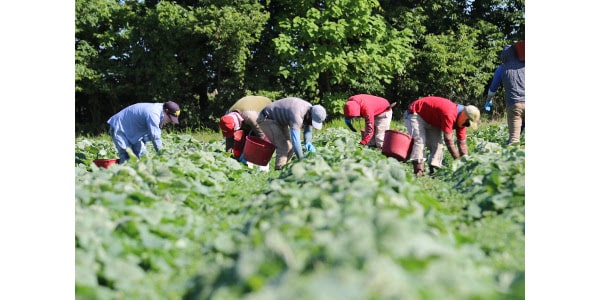 The migrant farm workers listen in rapt attention as Roberto Rosales discusses the dire consequences of “el monstro verde” — the green monster. He’s not talking about the famed left field wall at Boston’s Fenway Park, or a villain in a children’s story. El monstro verde is the Latin American term for green tobacco sickness, a real and present danger for anyone harvesting tobacco plants. (file photo)

He’s not talking about the famed left field wall at Boston’s Fenway Park, or a villain in a children’s story. El monstro verde is the Latin American term for green tobacco sickness, a real and present danger for anyone harvesting tobacco plants.

Handling tobacco leaves can lead to nicotine poisoning, which can cause nausea and vomiting and lead to hospitalization. Workers suffering from the ailment are at greater risk for heat illness — a potentially deadly condition during a hot and humid North Carolina summer.

Speaking in Spanish, Rosales explains that moisture from rain, dew or sweat allows nicotine to get onto the skin and pass into the bloodstream more easily. He talks about the safety measures to protect from el monstro verde, including gloves, long sleeve shirts, long pants and water-resistant clothing. If someone collapses from heat exhaustion, he stresses the importance of getting them out of the sun immediately and fanning them off to bring their temperature down, and of calling a supervisor or 911. Preventative measures, he says, include drinking plenty of fluids, especially water and a rehydration drink high in electrolytes such as Pedialyte.

Rosales is a farmworker health and safety educator for NC State Extension. He recently moved from Extension’s Wilson County center to the main campus in Raleigh. He leads a team that includes Alejandra Mendoza (Johnston and Duplincounties), Olivia Antonio-Ventura (Sampson and Bladen counties) and Chris Just(Henderson County).

“My responsibilities include supporting our educators in implementing the program and helping expand our program reach across the state to address farmworker education in order to create a healthier and safer work environment,” Rosales said.

The Farmworker Health and Safety Education Program provides educational opportunities and resources that benefit workers and the farms that employ them. Farmers, farm labor contractors, farmworkers and their families receive vital information and training on health and work safety issues. The program has a direct positive impact on workers and their families well-being while improving farm production and allowing growers to remain in compliance with industry standards and regulatory agencies.

“The consumers are getting the product they are paying for from a farm that is working to create a healthier and safer working environment,” Rosales said. “It’s part of creating sustainability in our agriculture labor force and being conscious of how the food gets to our table in a fair way.”

It was created in 2014 with a grant from Philip Morris International. Rosales came on board in 2018.

“With increased worker training requirements from regulatory agencies and industry groups, the program has come at a great time for Extension,” Rosales said.

Between them, Rosales, Mendoza, Ventura and Just cover 10 rural farming counties around the state, providing training for full-time employees and migrant workers in North Carolina on H-2A visas. They conduct 90-minute training sessions, usually on-farm, on topics that include green tobacco illness, heat stress, worker protection standards, pesticide safety, awareness of the dangers working with and near farm machinery, and COVID-19 prevention.

“When farms grow different crops, if they want to enter new markets, they have to meet different requirements,” Rosales said. “A lot of it overlaps. It’s the same basic training, but some require additional information. For example, if they grow tobacco they require green tobacco illness training. Every farm is different. When an educator comes on we tailor it. We take questions, which really elevates that level of engagement.”

They provided training for 1,964 farmworkers in 2021 and are on track to surpass that this year.

The sessions allow farms to meet EPA Workers Protection Standard (WPS), Good Agricultural Practices (GAP) and U.S. Tobacco Agriculture Practice training requirements. Some of the certifications are necessary to export goods out of state and overseas.

“It’s a wonderful service,” said Cathy Hendricks, food safety manager at Boseman Farms in Edgecombe County. “We’re a big operation and we want to comply with all the rules. You can get caught up in trying to get everything done on the farm. It makes it more apt to happen when somebody like Roberto can come in and give it. Even if they’ve been on the farm all their life it just refreshes their knowledge.”

During the height of the pandemic, the farmer safety program was laser focused on COVID-19 prevention through testing and vaccination. Extension provided educational posters, hand sanitizer, masks, testing kits and hosted vaccination clinics for migrant workers. Rosales recorded a series of videos in Spanish.

Coronavirus awareness and testing kits remain an important component of the program, but the emphasis has returned to the most common work safety issues typical to farms.

Much of the training is given to migrant workers. About 30% of farms in North Carolina address labor scarcity by using seasonal workers on H-2A visas to help plant and harvest crops.

Rosales conducts his training for H-2A workers entirely in Spanish.

“To have somebody from Extension do training in Spanish, it resonates more,” he said. “There were a lot of communication barriers due to language. Extension was able to go into that space. Our program has been focused on bridging that gap. When they see the farmer bring somebody on to do the training in their language, it elevates the trust.”

He uses posters and charts to emphasize points, but mostly he employs a conversational style, asking questions, making sure there is feedback from the audience.

“He’s just an all-around good guy,” Hendricks said. “He knows what he’s talking about; he’s bilingual, which is a plus. They take it seriously. They interact with him. You can see how engaged some of them are. It’s a win-win.”

When Rosales looks over a group gathered for a training session, he sees more than workers in need of safety training. He also sees his own family. His parents are from San Luis Potosi in central Mexico, and were seasonal guest workers who migrated up and down the East Coast.

“I always see my uncle, my sister, or my dad or my mom,” he said. “That’s who I envision when I do these trainings. Some of these things that are required now weren’t required when they were working. A lot of that is in the back of my mind. What would I have wanted my parents to have known?

“On a personal level that’s what motivates me everyday to do these trainings. It’s a lot of work, a lot of coordination. But it helps the farm, and it helps the people doing the work.”

You can help the Monarch Butterflies