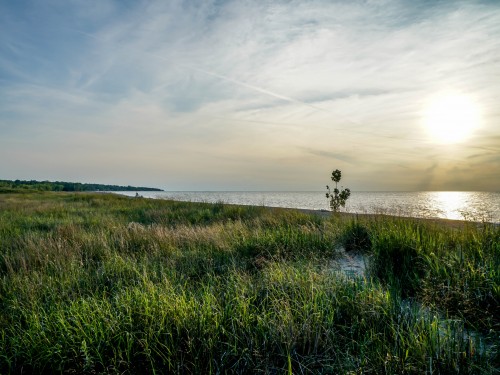 Phosphorus filters are being studied in Ohio as a possible means of improving water quality in Lake Erie and other bodies of water. (Getty Images)

COLUMBUS, Ohio — In a pit about 3 feet underground lies one possible solution to reducing a large amount of the phosphorus draining from some of Ohio’s agricultural fields.

At two locations in the state, researchers with The Ohio State University College of Food, Agricultural, and Environmental Sciences (CFAES) are testing phosphorus filters that have removed up to 75 percent of the phosphorus running through them. Phosphorus can be found in commercial fertilizers and animal manure.

“This filter has great potential,” said Larry Brown, an agricultural engineer and faculty member at CFAES who is studying phosphorus filters in Ohio. “The chemical used is very efficient at absorbing phosphorus.”

During a five-year span, a phosphorus filter can remove up to 75 percent of the phosphorus flowing through it, depending on how the filter is designed, he said.

The phosphorus filters that the researchers installed are on a privately owned farm in Putnam County and in CFAES’ Waterman Agricultural and Natural Resources Laboratory in Columbus. A third is slated to be installed in Defiance County later this year.

A phosphorus filter can be costly, up to $20,000 or more, depending on the field size and the phosphorus concentrations in the soil, Brown said. But Brown, who is researching the effectiveness of phosphorus filters with other CFAES faculty and the U.S. Department of Agriculture, is looking into grants that would help bring down the cost of the filter and other systems for stemming nutrients coming from agricultural fields.

“There’s been a lot of discussion about who causes the algal bloom problem in Western Lake Erie or what causes the problem,” Brown said. “We’re trying to figure out what can take care of the problem.”

Brown will be one of numerous speakers at the upcoming, annual Conservation Tillage and Technology Conference, set for March 5–6 on the campus of Ohio Northern University in Ada, Ohio. Christine Jones, an Australian soil ecologist, will be the keynote speaker with the topic “Building New Topsoil Through the Liquid Carbon Pathway for Long-Term Productivity and Profit.”

The conference is sponsored by CFAES and includes speakers from the college as well as the agriculture industry.

Along with being high in phosphorus, the rainwater running off of agricultural fields also can be high in nitrate, a component of nitrogen, which is used in commercial fertilizers and is commonly found in manure. Brown is also studying how to remove nitrates from agricultural fields by having the water pass through a pit containing woodchips from hardwood trees, a system commonly called a bioreactor. The woodchips become food for anaerobic bacteria that can function with little oxygen and consume the nitrates in the soil, turning the nitrates into nitrogen gas, which is harmless.

“It’s a clean conversion if the bioreactor is properly designed, installed and managed,” he said.

Brown cautioned that if the system is not set up correctly and the water remains stagnant in spots, nitrous oxide, a greenhouse gas, could be produced.

The warmer the temperature underground, the more nitrates the anaerobic bacteria can consume, but the nitrates can function when the soil temperature is as low as 5 degrees, he said.

This system for filtering out nitrates could last up to 10 years and costs between $8,000 and $25,000 depending on the field size and the amount of water it processes, Brown said.

After several years, the system could remove up to 70 percent of the nitrates funneled through it, he said.

If excess nitrates enter a public drinking water source, a municipality has to take additional measures to treat the water and must alert the public if the nitrate levels are over 10 parts per million.

Almost every year, somewhere in Ohio, at least one public alert goes out about high nitrate levels in drinking water, Brown said.

“Later in the spring we may start seeing some alerts because of the amount of rain we had in the last year,” Brown said. “I’m expecting to see high nitrate alerts somewhere in Ohio.”

For more information and an agenda for the Conservation Tillage and Technology Conference, visit go.osu.edu/tillageconference.