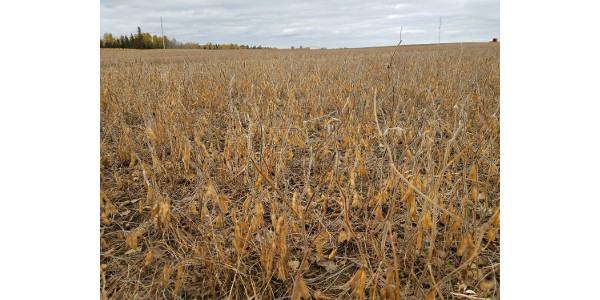 EAST LANSING, Mich. — Many farmers enjoy recreational hunting, and opening day of gun season for white-tailed deer is something just short of a national holiday in Michigan. Others just enjoy seeing wildlife out the back window at home—deer, wild turkey, pheasant, Canada geese, sandhill cranes and many other species provide hours of entertainment through the lenses of cameras and binoculars. Wildlife is a key part of what many Michiganders find so attractive about our state, especially in rural areas. Unfortunately, wildlife can also be a problem for farmers when they damage crops and reduce yields.

Deer damage to corn and soybean is predominantly in the form of grazing tender leaf shoots or feeding on immature grain, but can also include trampling and bedding. Severe defoliation of soybean prior to the V6 growth stage can significantly reduce yield, while less severe damage can often be compensated for by branching and regrowth. In a 2015 study in soybean in Presque Isle County, Michigan State University Extension educator James DeDecker found that early-season defoliation (up to V6) resulted in yield loss of 10 percent on average with a range of 0–100 percent in some fields.

In corn, deer will feed on immature tassel tissue in the whorl during mid- to late-June (until corn stage ~V10) and also on developing ears in early- to mid-August at the milk stage (R3), according to Purdue University’s Bob Nielsen in “Decapitation of Corn Plants by Deer.” Indiana farmers reported monetary losses of 2 and 2.8 percent of crop value from deer in corn and soybean, respectively, according to “Corn and Soybean Crop Depredation by Wildlife” by Purdue University Extension.

Deer damage can be especially detrimental for those growing high value seed corn or foundation seed (the precursor to parent inbreds), which are often planted in small fields and isolated locations near prime deer habitat. These crops are grown under contract, and since reliability of yield is very important to the seed companies, the potential for loss of current and future income from wildlife damage is significant. Both non-lethal and lethal control tools exist for producers experiencing losses from deer damage, including fencing, repellents, habitat modification and shooting. As with all lethal forms of control, be sure to obtain the necessary permits before shooting—see the MSU Extension article, “Do I need a permit to control wildlife on my farm?” to find out more.

Sandhill crane populations have been on the rise in the Great Lakes region, increasing 1.5–4.4 percent annually according to the Michigan’s Department of Natural Resources 2017 resource, “Sandhill Crane Status in Michigan.” Sandhill cranes impact corn and wheat production shortly after young plants emerge from the soil. The birds will commonly use their beaks to penetrate the ground at the base of seedlings and pull up the seed to eat it, leaving the seedling behind. They will often walk down corn rows, depopulating the stand, until the seeds no longer have starch reserves—typically about three weeks after emergence. As with deer damage, this feeding behavior can have an especially negative impact on seed and foundation corn production.

There are several non-lethal methods of deterring crane feeding in crops—propane canons, flags/balloons/streamers, shotgun or other noise makers, seed treatment repellents. Depredation permits issued by the U.S. Fish and Wildlife Service are an option when non-lethal methods have proven unsuccessful.

Wildlife impacts to fruit and vegetables

In addition to row crop farmers, fruit and vegetable farmers also need to be concerned with the potential impacts of wildlife on their production. Animals may not only feed on these crops, but their urine and feces could pose a foodborne illness risk and raise red flags for food safety auditors. Produce growers should contact a member of the Agrifood Safety workgroup within MSU Extension for further information about meeting Food Safety Modernization Act minimum requirements and Good Agriculture Practices (GAP) certification standards.

MSU Extension will host a free webinar on March 22, 2019, at 1 p.m. EST to inform crop producers about wildlife species that can impact field crop production and options for control. Tim Wilson, a district supervisor/wildlife biologist with Michigan’s USDA-APHIS Wildlife Services will discuss sandhill crane behavior and methods of management. Ashley Autenrieth, a deer program biologist with Michigan Department of Natural Resources, will discuss management tactics for deer and other game species under state jurisdiction. DeDecker, a specialist with MSU Extension, will discuss deer damage to corn and soybeans including innovative strategies for damage prevention and control. Farmers who have had experience with deer and crane damage will also share what they have learned trying both non-lethal and lethal management methods.

At the conclusion of the webinar, attendees will be invited to participate in a field demonstration of Avipel crane repellent seed treatment during 2019, where product will be distributed to participating growers and MSU will collect crane damage data on their farms. Interested growers can contact Brook Wilke, farm manager at the W.K. Kellogg Biological Station, at wilkebro@msu.edu to find out more about that opportunity.

There is no cost to attend the webinar and no pre-registration is required. The webinar can be accessed by following this link: https://tinyurl.com/MSUEWildlifeManagement.

In addition to this webinar, a new set of fact sheets has been produced by the Great Lakes Ag and Wildlife Coexistence Work Group that will be available on the Wildlife Management website this spring. According to MSU Extension senior educator Erin Lizotte, these fact sheets focus on the agricultural perspective of wildlife management and include information on damage identification, available control strategies and relevant regulatory agencies.

Beliefs about wildlife management are changing
May 2, 2019