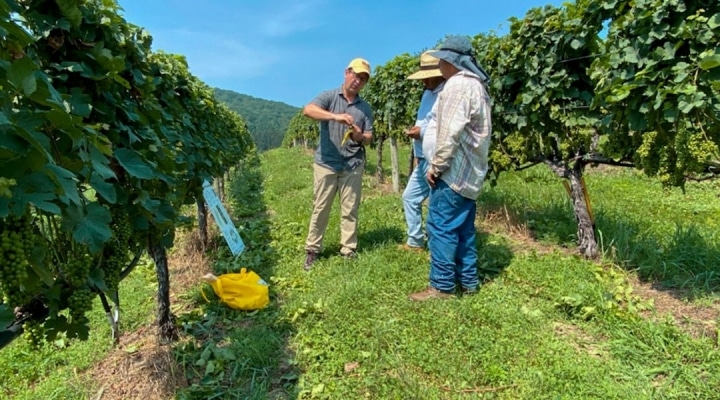 ITHACA, N.Y. — The spotted lanternfly – an invasive, destructive pest with a wide range of hosts including grapes, apples, hops, maple and walnut – has spread to a growing number of counties in New York state.

The first major infestation in the state was detected in Staten Island in August 2020, and the insect appears to have established itself there.

The pest has also been reported and confirmed in Sloatsburg, Rockland County; Port Jervis, Orange County; and in Ithaca.

While the tree of heaven is the pest’s preferred host, the insect is of agricultural concern as its host range covers some 70 different species of plants, including those that fuel the state’s agricultural economy. New York is the country’s second-largest apple producer with average annual harvests of close to 30 million bushels. The state’s wine industry – from grape growing to bottle sales – generates an annual economic impact of $6.65 billion, according to the New York Wine and Grape Foundation.

“Once these insects reach some of the [state’s] grape production areas, there’s going to be an impact,” said Alejandro Calixto, director of the New York State Integrated Pest Management program at Cornell University.

To help with outreach and education in the state’s agricultural communities, Cornell has been running trainings for industry workers. “They’re the ones on the front lines, so we’re teaching them how to identify and spot those insects and then to report them to their managers so they can take action quickly,” Calixto said.

Although they don’t bite or sting, and pose no threat to people or animals they can become quite a nuisance. The nymphs and adults have mouthparts that drill into plants and suck sap, causing damage that makes plants susceptible to other bugs and disease. They also excrete a sticky fluid called honeydew, which attracts other insects, sticks on cars and can become a breeding ground for sooty mold.

If members of the public find a spotted lanternfly, they should contact the New York State Department of Agriculture and Markets (Ag and Markets), Cornell University, or their county or town to report it, Calixto said. “Early detection is very important,” he said.

Be on the lookout for spotted lanternfly
September 15, 2021