Home » Keep an eye out for big beetle 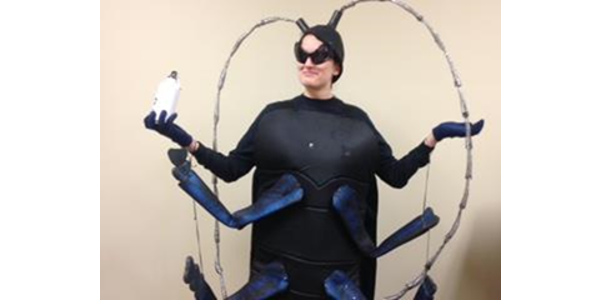 “It’s might be hard to miss me in the costume, especially when the antenna are as tall as I am, but the bug itself can be much sneakier!” Says Nor Serocki, Coordinator of the SWxSW Corner CISMA. (Courtesy of Van Buren Conservation District)

PAW PAW, Mich. — This month the SWxSW Corner CISMA is asking residents to keep an eye out for where the Giant Asian Longhorn Beetle is in their Facebook Posts to help raise awareness of the invasive forest pests. Asian Longhorn Beetle, often called ALB, is a large insect from China and isn’t known to be in Michigan, but this costumed character is hoping to get people talking.

“It’s might be hard to miss me in the costume, especially when the antenna are as tall as I am, but the bug itself can be much sneakier!” Says Nor Serocki, Coordinator of the SWxSW Corner CISMA. ALB is a big insect, .75-1.5in, with long, blue stripped antenna and white spots, but even a big bug is hard to spot when it’s only a handful of them in a forest. “As with all invasive species, it’s best to catch ALB and other forest pests early. It’s much easier to get rid of 10 bugs than 10,000.”

ALB is one of the major concerns of the SWxSW Corner Cooperative Invasive Species Management Areas (the CISMA), because it can eat through maples, elms, and just about any other kind of hardwood tree. Like Emerald Ash Borer, which came to the US in the late 1900’s and ate its way through our ash trees, ALB lays eggs under the bark of trees, where the larvae will eat through the water moving tissue, killing the tree. Unlike Emerald Ash Borer, ALB isn’t wide spread, and can still be kept out of Michigan.

“The best way to stop any forest pest is to stop moving firewood. Even a 1” long beetle can’t fly very far, but we’ll cart wood, and pests, all around the state in a day if we aren’t careful.” The CISMA encourages that people buy firewood where they plan to burn it to prevent moving bugs or fungi that could cause thousands of dollars of damage. This small change alone could have a big impact on protecting our trees from ALB, but also from pests that are already here, such as Emerald Ash Borer, Hemlock Wooly Adelgid, and oak wilt.

Also, keep an eye out for these bugs or tree die back! All month, the CISMA is hosting a photo contest on its Facebook page to help raise awareness about pests in our area. Head over to the page each Friday, and comment where the ALB in Berrien, Cass, or Van Buren county the photo is that week. Those who get it right will be entered into a drawing for cool prizes and will get their name published on the next week’s post!

The SWxSW Corner CISMA is a grant-funded organization working to help land owners, local governments, and concerned citizens understand and manage the invasive species threats in Berrien, Cass, and Van Buren counties. If you have invasive species on your property, or if you would like to have a CISMA representative speak for or work with your organization, please contact your county’s CISMA representative at any time! The CISMA is funded in part by the Michigan Invasive Species Grant Program, through the Departments of Natural Resources, Environmental Quality, and Agriculture and Rural Development.