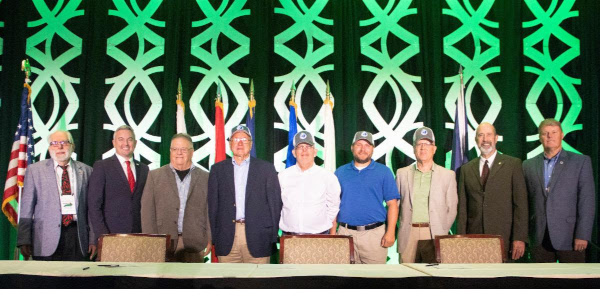 FRANKFORT — The Kentucky Department of Agriculture (KDA) is handing off its ownership of its successful Homegrown By Heroes campaign to the national Farmer Veteran Coalition, allowing it to continue the program’s unprecedented growth and fulfilling the terms of a 2017 memorandum of understanding between the two organizations.

Homegrown By Heroes was created by the KDA in 2013 to promote agricultural products produced by military veteran farmers. Since then the program has grown to include active-duty personnel, reservists and National Guard members. The Farmer Veteran Coalition and the KDA embarked on an agreement that same year allowing the Coalition to grow the program on a national scale. Today, Homegrown by Heroes has more than 2,000 certified producers around the nation.

While grown nationally by the Farmer Veteran Coalition, KDA continued to own the rights to the Homegrown By Heroes name and logo. This distinctive logo served as identification to prospective consumers that the products were locally grown or raised by a veteran. From the grocery shelf to the farmers’ market to on-line retail, this label served as an extra incentive to consumers when making a purchase decision. During the last few years, KDA licensed the logo rights to the Coalition to be used nationally. With today’s agreement, those rights will now move over to the Farmer Veteran Coalition.

“The Homegrown by Heroes program has been instrumental in promoting the successful farming careers of active-duty and veteran military members,” KDA Commissioner Dr. Ryan Quarles said. “In 2013, the Kentucky agriculture community was excited about the prospects of honoring our farmer-veterans with their own logo and now, eight years later, we are just as thrilled to turn it over to the Farmer Veteran Coalition. We know it’s in good hands.”

The Farmer Veteran Coalition is a national nonprofit organization based in Davis, California, that seeks to help veterans find employment and careers in agriculture by providing training, mentorship, financing and marketing support.

While the Coalition will now own the Homegrown by Heroes trademark, KDA will still partner with the organization to help Kentucky military members promote their agricultural products by maintaining its own Homegrown By Heroes marketing program. KDA continues its desire to assist with the marketing and promotion of agricultural commodities produced by military veterans of the United States Armed Forces, active-duty servicemen, reservists and members of the National Guard.

To learn more about Homegrown By Heroes program and eligibility, visit the KDA’s website, kyagr.com, or the Coalition’s website, farmvetco.org.