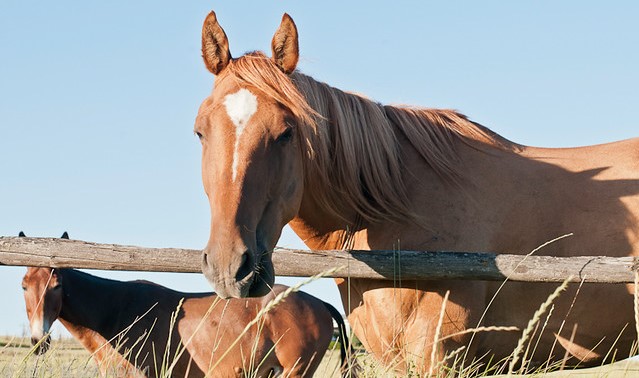 The Kansas Department of Agriculture has announced that vesicular stomatitis virus (VSV) was confirmed in horses in Butler County on June 16, 2020. (Eliza Adam, Flickr/Creative Commons)

MANHATTAN, Kan. — The Kansas Department of Agriculture has announced that vesicular stomatitis virus (VSV) was confirmed in horses in Butler County on June 16, 2020. Kansas becomes the fourth state in the U.S. to have confirmed cases of VSV this year.

The infected horses live on different private residences in south central Kansas. When clinical signs were first identified on a premises in Butler County, KDA contacted veterinarians in the region to alert them of the possibility of VSV, which led to additional suspect cases in the area. Upon receiving the laboratory confirmation, KDA established a quarantine on the three affected premises. KDA has tested a number of other animals in the region which are showing clinical signs consistent with VSV, and are awaiting final laboratory testing.

“Protecting the health and safety of horses and other livestock in Kansas is our highest priority,” Dr. Justin Smith, Animal Health Commissioner said. “We encourage all livestock owners across Kansas to be aware of the clinical signs of VSV and follow best practices to limit exposure to insects. Livestock owners should take extra precautions to limit exposure to other animals.”

VSV is a viral disease which primarily affects horses, but can also affect cattle, sheep, goats, swine, llamas and alpacas. In horses, VSV is typically characterized by lesions which appear as crusting scabs on the muzzle, lips, ears, coronary bands, or ventral abdomen. Other clinical signs of the disease include fever and the formation of blister-like lesions in the mouth and on the dental pad, tongue, lips, nostrils, ears, hooves and teats.

Infected animals may refuse to eat and drink, which can lead to weight loss. Vesicular stomatitis can be painful for infected animals and costly to their owners. Humans can also become infected with the disease when handling affected animals, and can develop flu-like symptoms.

The primary way the virus is transmitted is from biting insects like black flies, sand flies and midges. Owners should institute aggressive measures to reduce flies and other insects where animals are housed. VSV can also be spread by nose-to-nose contact between animals. The virus itself usually runs its course in five to seven days, and it can take up to an additional seven days for the infected animal to recover from the symptoms. Premises with animals diagnosed with VSV are quarantined for at least 14 days after the last affected animal is diagnosed. There are no USDA-approved vaccines for VSV.

VSV is considered a reportable disease in Kansas. Any person who suspects their animals may have VSV should contact their local veterinarian or state animal health official.

When VSV was confirmed in neighboring states this spring, KDA implemented increased importation requirements from the affected regions to help prevent the spread of VSV into Kansas. Because of the confirmed case in Kansas, other states and Canada are likely to increase restrictions on livestock imports. Animal health officials strongly encourage all livestock owners and veterinarians to call the animal health authority in the destination location for the most current import requirements prior to travel.

For more information about VSV, including documents outlining symptoms, fly control practices, and current situation reports, please visit the KDA website at www.agriculture.ks.gov/VSV. If you observe clinical signs among your animals, contact your veterinarian right away. For questions about VSV in Kansas, please contact the KDA Division of Animal Health at 785-564-6601.