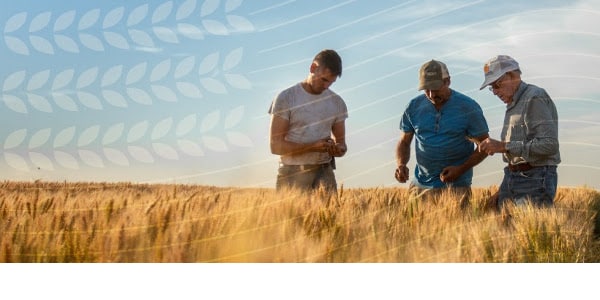 To mark its 40-year anniversary in 2020, USW has launched an outreach effort to recognize and celebrate the people who produce the wheat and their enduring partnerships with the U.S. Department of Agriculture, wheat buyers and wheat food processors around the world. (Courtesy of Kansas Wheat)

MANHATTAN, Kan. — On January 12, 1980, wheat farmer leaders with Great Plains Wheat and Western Wheat Associates officially merged to become one organization, U.S. Wheat Associates (USW), to focus on building overseas demand for U.S. wheat. To mark its 40-year anniversary in 2020, USW has launched an outreach effort to recognize and celebrate the people who produce the wheat and their enduring partnerships with the U.S. Department of Agriculture, wheat buyers and wheat food processors around the world.

Kansas wheat farmers, Gary, Jeremy and Kyler Millershaski, Lakin, are featured in a new video on the website. In what is now the kitchen of the family farmhouse, Earl Kleeman was born in 1930, the same year his parents bought their farm north of Lakin, Kan. His son-in-law Gary Millershaski started farming with him in 1992 and grandsons Jeremy and Kyler joined the operation three years ago. Sadly, Earl passed away in 2019, but not before he proudly helped harvest what was one of the family’s best wheat crops in years. We honor the legacy of commitment and partnership that Earl and countless other farmers of his generation created to provide the highest quality wheat for almost every customer need.

“This anniversary is a platform for us to reinforce our authentic story-that behind the world’s most reliable supply of wheat are the world’s most dependable people,” said Steve Mercer, USW Vice President of Communications. “In online media, new marketing materials and face to face with overseas wheat buyers, we are going to talk about the legacy of commitment from farmers and the important partnerships that are a unique and differential part of importing U.S. wheat.”

The primary component of the USW campaign is a new landing page on www.uswheat.org titled “Our Story.” The page includes historical background and profiles of U.S. wheat farm families and overseas customers. The campaign also features a new video that defines the value created by farmers, the U.S. wheat export supply system and the service the USW organization offers to flour millers and wheat food processors around the world.

“Many of the millers and bakeries USW works with overseas are also family-owned and going through the same generational changes as U.S. farm families,” Mercer said. “That is one reason why we will emphasize past and present connections between our farmers and customers in those stories, through our Wheat Letter blog and in Facebook and Twitter posts as we continue to update content throughout 2020.”

USW’s mission is to “develop, maintain, and expand international markets to enhance wheat’s profitability for U.S. wheat producers and its value for their customers.” USW activities in more than 100 countries are made possible through producer checkoff dollars managed by 17 state wheat commissions and cost-share funding provided by the USDA/Foreign Agricultural Service.

Grain in Maine headed for the stein, not down the drain
March 1, 2020