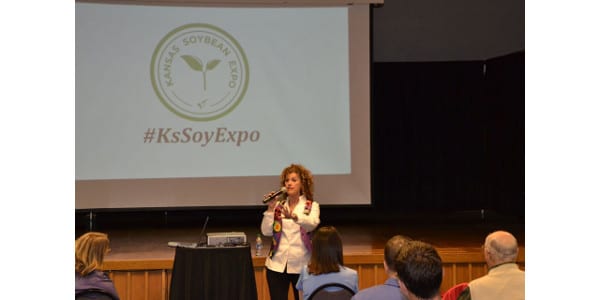 “In agriculture, we are always trying to learn and improve, and this year’s Expo provided an excellent opportunity to learn from leading researchers, industry partners and other farmers,” said KSA First Vice President Teresa Brandenburg, Osborne, who chaired the Expo planning committee. “That made for a wonderful day.”

“Leslie moved from Hollywood to rural Ohio to live and work on her husband’s 100-year-old family farm,” Brandenburg said. “Her agricultural humor from a decidedly different perspective was like Green Acres brought to life.

“Her outlook and humor about farming, married life and motherhood reminded us that, no matter the situation, there is always something to laugh about. It was such a treat to have an entertainer who regularly appears on multiple TV programs join us for a day of fun, learning and fellowship.”

Steve Scott, the farm and ranch news director for KKOW-AM 860 in Pittsburg, was the master of ceremonies at the luncheon. The featured speaker was Kansas Secretary of Agriculture Mike Beam. He discussed the Kansas Department of Agriculture’s role; growth strategies for the soybean sector; his recent trade mission to Taiwan with the U.S. Soybean Export Council; and some of the state government’s rural-focused, “front burner” topics and projects.

During the awards and recognitions, Marvin Wahl, Oswego, was recognized for six years of service on the KSA board of directors; Ron Ohlde, Palmer, for nine years on the United Soybean Board; and Kurt Maurath, Oakley, for three years as KSC chairman. Jeremy Olson, Everest, was introduced as this year’s ASA Corteva Agriscience Young Leader.

Chris Fisher with WIBW-TV 13 in Topeka received the Friend of Soy award. He arrived at the station in October 2011 and now is anchor for the morning and midday shows. He has provided his viewers with information about the soybean industry by scheduling KSC Consumer Media Specialist Charlene Patton’s cooking programs, involving her in weekend teasers, sharing video for the Kansas Soybean website and YouTube channel, offering Facebook Live opportunities, and promoting the Expo every year.

“Chris has made a difference,” Patton said, “and we are fortunate to get to work with him.”

Awards for meritorious service were presented in absentia to Dallas Peterson, Manhattan, and Jim Zwonitzer, Horton. Peterson was a weed scientist in the Kansas State University Department of Agronomy and for K-State Research and Extension for 30 years, retiring in October 2019. Zwonitzer represented the Kansas soybean sector nationally and internationally for more than 40 years in numerous roles with both KSA and KSC.

Charles Atkinson, Great Bend, who represents KSA on the American Soybean Association board of directors, outlined the national organization’s 2019 policy successes and 2020 priorities then shared its centennial celebration plans for the coming year.

Kohls (Moundridge) announced the district and overall winners in the Kansas Soybean Yield and Value Contests. LarMar Inc., Robinson, led the dryland division with a no-till entry of 94.01 bushels per acre. Love & Love Farms, Montezuma, topped the statewide irrigated division with a no-till entry that made 88.82 bushels per acre. Longenecker Farm, Abilene, won the value contest with 66.4 cents per bushel of increased value (7.2% over the cash price). This year, for the first time, the highest protein content also earned special recognition, and that went to Chris Bodenhausen, Muscotah, whose entry was 37.3% protein. Complete results and award photos are available via https://KansasSoybeans.org/contests on the web.

The day’s program concluded with David Schemm, Sharon Springs, state executive director of the U.S. Department of Agriculture Farm Service Agency, who provided a special update about those programs related to commodities and disasters, natural-resources conservation, and agricultural credit.