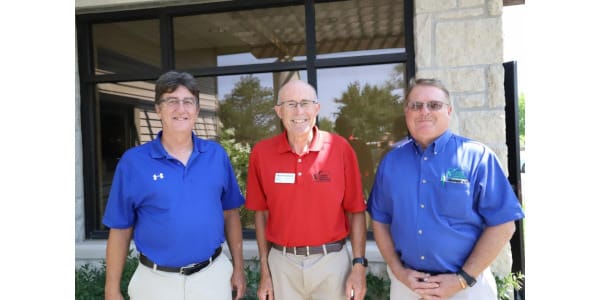 Bob Haselwood, Berryton, reprised the role of Chairman. He raises soybeans, corn and wheat and is the process of transferring the farming operation to his nephew. Since joining KSC in 2005, Haselwood has held numerous leadership positions and just recently became the World Initiative for Soy in Human Health board treasurer. The Chairman supervises and maintains control of all business pertinent to the Commission’s work.

Ron Ohlde continues in the Vice Chairman position. He raises soybeans, corn, wheat, sorghum and cattle near Palmer. Ohlde has served as a Commissioner since 2003 and occupied a number of leadership roles during his service. The Vice Chairman acts in the absence of the Chairperson.

The secretary Gary Robbins, who farms near Havensville. He farms with his wife and son growing soybeans, corn, wheat, hay and they raise background steers. Robbins moved into his Commissioner role in 2020 following 18 years on the Kansas Soybean Association board. The secretary is tasked with maintaining corporate records and minutes from meetings.

Raylen Phelon continues as treasurer. He farms near Melvern alongside his wife and son growing soybeans, corn, wheat, hay and they manage a cow and calf herd. The treasurer manages the receipt, deposit, disbursement and investment of soybean checkoff funds.

Each of these positions serve on the Commission Executive Committee, which is tasked with maintaining routine operations of KSC business and, in certain cases, may authorize expenditures within individual program levels as approved by the Commission.

Term of office encompass one calendar year from one Annual Meeting to the next.

PrairieFood adds Thomas Hoenig to its Advisory Board