Home / Kansas / Kansas Livestock Association leaders elected
A new user experience is coming! We'll be asking you to login to your Morning Ag Clips account March 1st to access these new features.
We can't wait to share them with you! Read more here. 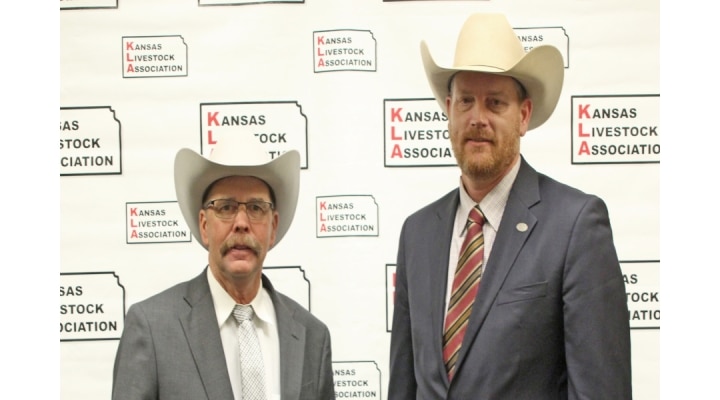 WICHITA, Kan. — Jefferson County rancher Phil Perry of Oskaloosa moved up to president of the Kansas Livestock Association (KLA) during the group’s annual business meeting December 3 in Wichita. Members chose Shawn Tiffany, a cattle feeder from Herington, as the new KLA president-elect. Perry and Tiffany will lead the 5,700-member organization during the next year.

Perry has been involved in the cattle industry for more than 40 years. He and his wife, Rhonda, own a cow-calf operation and custom preconditioning business. The bulk of the Angus-based cowherd calves in the spring. Depending on marketing opportunities, the Perrys either sell calves after weaning or retain ownership through the finishing stage, which is carried out in custom feedyards in western Kansas.

Perry grew up in Oskaloosa and he and Rhonda currently reside on land that has been in his family for six generations. They have two grown children, Nickie and Nathan, and 11 grandchildren. Nickie, her husband, Gary Johnson, and their five children live in Overland Park. Nathan, his wife Lynn, and their six children live near Oskaloosa.

Involvement in KLA has been important to Perry throughout his 38 years of membership. He currently serves on the KLA Board of Directors and the Jefferson County KLA Committee. Perry was chairman of the KLA Stockgrowers Council in 2014 and served as Jefferson County KLA chairman from 2012 to 2014. He also has served on the National Cattlemen’s Beef Association (NCBA) Board of Directors and is a graduate of the NCBA Young Cattlemen’s Conference. Additionally, Perry is a member of the Kansas Beef Council Executive Committee and represents Kansas on the Cattlemen’s Beef Board.

Tiffany co-owns and operates Tiffany Cattle Company Inc. with his brother, Shane. The two grew up in the cattle feeding business and when the opportunity arose in 2007 to purchase the feedyard their father managed for several years, Black Diamond Custom Feeders near Herington, they saw it as a chance to establish something of their own. Since that time, the joint venture has grown to include a second finishing yard near Marquette and, most recently, a grow yard at Allen. Tiffany also is a partner in Elevate Ag, a company that produces biological inputs for farming and grazing systems. Prior to starting the family business, he served as ranch manager for Chair Rock Angus near Greeley.

Tiffany believes in being actively engaged in the organizations in which he is involved. He joined KLA because of the important role the association plays within the industry, especially as it relates to navigating regulatory issues. Over the years, he has held several positions within the organization. Currently, he serves as chairman of the KLA Natural Resources Committee and is a member of the KLA Policy and Resolutions Committee. He also serves on both the KLA Environmental Services Inc. Board of Directors and KLA Risk Management Services Inc. Board of Directors.

Tiffany was the Morris County KLA chairman from 2012 to 2017 and held an at-large position on the KLA Board of Directors from 2019 to 2020. He participated in the 2018-19 Feedyard Leadership Program and the 2009 KLA Leadership Conference. Tiffany represents Kansas on the NCBA International Trade Committee. Additionally, he is active in his church and on various local committees, including serving as president of the board for TCT, a rural telecommunications company.

Tiffany received his bachelor’s degree in animal sciences and industry from Kansas State University in 2000. He and his wife, Nicky, have five children, including Ransom, Taylor Jo, Ainsley, Whitney and Stockton.