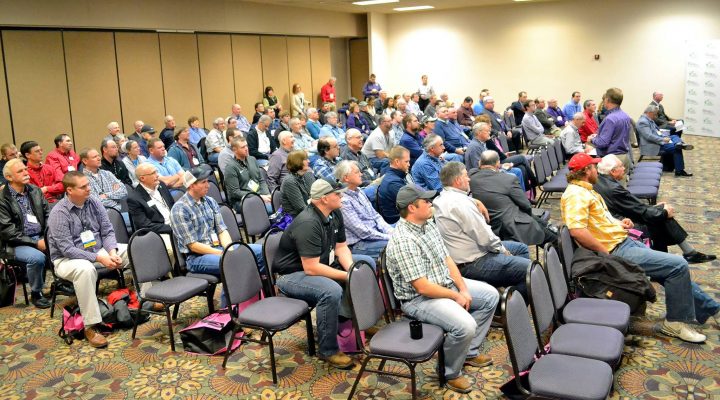 “We were really excited to have so many farmers and friends of the industry join us in Topeka,” said KSA Secretary Teresa Brandenburg, Osborne, who chaired the Expo planning committee. “It was a great day to network and advance the association’s and commission’s commitments to producer education.”

Clay Patton, Colby, a farm broadcaster for Kansas Farm and Ranch Radio, was the master of ceremonies at the luncheon. The featured speaker was Tracy Streeter, director of the Kansas Water Office. He discussed how Kansas is taking a regional approach to implementing its Water Vision and noted the Ogallala Aquifer will be 70 percent depleted in 50 years if users do not make changes.

To open the awards and recognitions, Andy Winsor, Grantville, and Matthew Atkinson, Columbus, who represented Kansas in 2015 and 2016, respectively, in the DuPont Young Leader program introduced and congratulated Brett Neibling, Highland, and Blair Geiger, Denton, as 2017 young leaders.

Maurath thanked Bob Haselwood, Berryton, for his years of service representing Kansas on the United Soybean Board and Dennis Gruenbacher, Andale, for serving as the 2015-2016 KSC chairman. KSA First Vice President Lucas Heinen, Everest, then presented a plaque to Phelon, the outgoing president.

The Friend of Soy award went to Kelly Lenz, Topeka, farm director for WIBW Radio and the Kansas Agriculture Network (KAN). In 1983, he started the Ag Issues program on WIBW Radio, one of the first agricultural talk shows in the nation, and the popular WIBW Farm Profit seminars. Under his leadership, the station also has presented annual programs at the Kansas State Fair, including debates for gubernatorial and senatorial candidates.

He currently heads up nearly 2.5 hours of ag programming on WIBW Radio each day and 16 broadcasts per day on KAN. He also does a 2.5-minute ag news and market report for WIBW-TV 13 in Topeka each day.

Next, Phelon presided over the KSA Annual Meeting. Kevin Scott, a member of the American Soybean Association’s governing committee from Valley Springs, South Dakota, outlined the national organization’s policy successes in 2016 and priorities for 2017. Dwight Meyer, Hiawatha, who chairs KSA’s policy committee, presented the guiding resolutions for 2017, which the voting members present accepted.

Phelon congratulated and thanked Marvin Wahl, Oswego, and James Zwonitzer, Horton, for being KSA’s top member recruiters. He then recognized Terry Reschke, Hiawatha, the outgoing KSA chairman, who is retiring from the board of directors after 15 years.

The board elections resulted in Brice Bunck, Topeka, as the new District 2 director; Gail Kueser, Garnett, returning as District 3 director; and Meyer (Hiawatha) returning as a director-at-large. With no candidate for District 6, the board will fill that vacancy at a future meeting.

Shoup, who coordinates the Kansas Soybean Yield and Value Contests, then announced the district and overall winners. Ernest Schlatter, Lebanon, topped the dryland division with a no-till entry that made 95.95 bushels per acre. Calvin Yoder, Hutchinson, led the irrigated division with a conventional-tillage entry of 93.79 bushels per acre. Henry Farms, Robinson, won the value contest with 80.3 cents per bushel of increased value (8.3 percent over the cash price). Complete results and award photos are available via http://KansasSoybeans.org/contests on the web.

The afternoon’s customary Planning for the Future session featured “Bold Talk for a 1-eyed Fat Man” by Darrell Holaday from Advanced Market Concepts in Wamego. He discussed managing the economic shifts in U.S. and world production agriculture by outlining capital flows, global efficiencies, how demand-led markets turn into supply-led markets, currency issues and the competitiveness of U.S. agriculture from a cost standpoint.

Expo photos and presentations are available via http://KansasSoybeans.org/expo on the web.