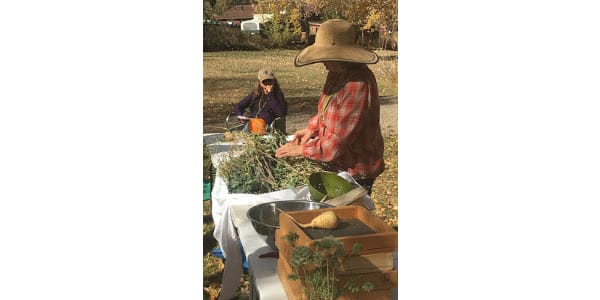 NORWOOD, Colo. — You may remember how trendy kale was a few years ago. Many restaurants had some sort of kale salad on the menu and we were all making kale chips and kale pesto at home. Farming of kale grew more than 57% between 2007 and 2012 because of consumer and restaurant demand! Apparently, kale is used in more than 400 products! And while Zagat declared in their National Dining Trend Survey in 2015, that kale is no longer “in” it is a crop that keeps on giving in my garden.

Several years ago, I planted a small patch of ‘Red Russian’ and ‘Blue Scotch’ curly kale in my garden. At the end of the season I decided to see if I could overwinter it to harvest seed the following year. I covered the plants with some row cover fabric held up by hoops. The following spring, although it was a little ‘burned’ from the cold, it quickly began to regrow and bolt. I only allowed the Red Russian variety to set seed—it was the one that overwintered best. I harvested it to demonstrate saving and processing kale seed at a Seed Saving class we held that October. I had plenty of kale seed to share!

It overwintered again, this time without protection, and I let it be there and kept harvesting it. The next year I wanted to use that spot for something else, so I pulled it all out of the bed. It had re-seeded at the base of the stone wall around the bed. I let that grow for two more years, with only the water from overflow from the bed behind it and without covering it in the winter. It continued to produce leaves that I harvested whenever I wanted them. Last year, I thought “enough is enough!’ I tried hard to remove it by cutting the thick woody stems back at ground level. It was quite tough since the bases were several years old and… it still came back this year!

Kale is easy to grow, obviously.  There are two species and main main types. Brassica oleacea (Dinosaur and blue curled kale) which will cross-pollinate with cabbage, broccoli, cauliflower, Brussels sprouts, kohlrabi and collards. Brassica napus (Siberian and Russian kales) which will cross-pollinate with rutabagas and swede turnips, as well as oil seed crops like canola and rape seed.

Kale can easily be planted by seed. For spring and summer harvest, plant kale seeds four weeks before last frost. For fall harvest, plant seeds eight weeks before the first frost.  Feed lightly and regularly while growing with a 5-5-5, or similar fertilizer and water as needed (kale will get aphids if stressed).

Keep cutting the oldest leaves when they are still succulent but do not remove more than 1/3 of all the leaves at a time. If you plan to grow kale for seeds, only save seed from plants that bolt after overwintering—early bolting is not a trait you want in the genetics of your seed.

Kale is nutritious!  It contains 900% daily needs of vitamin K and 600% vitamin A per serving!

Here are some great recipes:

Massaged Kale – Red Russian or Siberian kale are best for this recipe because of softer leaves. https://sanmiguel.extension.colostate.edu/wp-content/uploads/sites/40/2019/01/Massaged-Kale-Salad.jpg

Kale Pesto – You can use any kind of kale for this recipe. https://sanmiguel.extension.colostate.edu/wp-content/uploads/sites/40/2019/01/Kale-Pesto.jpg

Kale Chips – Any kind of kale can be made into chips but I prefer varieties that have flatter leaves.   https://sanmiguel.extension.colostate.edu/wp-content/uploads/sites/40/2019/01/Baked-Kale-Chips.jpg

Currently, my favorite way to eat kale is for breakfast—I just go out into the garden and pick a half dozen or so leaves and flash fry them in a small iron skillet until dark brown but not burned.  I add them to an everything bagel with smashed avocado and ‘everything but the bagel’ seasoning.

While kale might not be as trendy in the restaurants, it is not a crop I want to be without, and I’m not sure I could be, even if I wanted to.