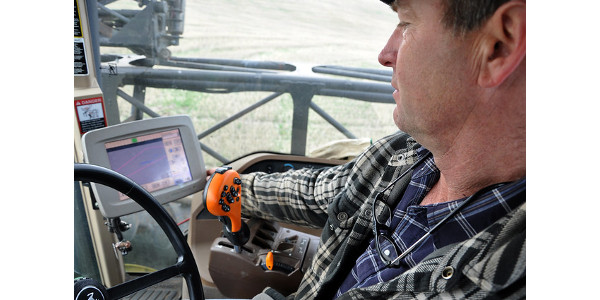 MANHATTAN, Kan. — How important are spring foliar fungicide applications to wheat yields? A new study by Kansas State University quantified the yield gain from these applications by combining 12 years of K-State-led experiments with survey data from Kansas wheat producers. Doing so not only demonstrated the power of fungicide to protecting a wheat crop from diseases like stripe rust but also paves the way for future guidance on when these applications will provide the most benefit.

“This is a different way of looking at an old problem,” said Romulo Lollato, a wheat production specialist with K-State Research and Extension. “We had a lot of these data scattered around, but we did this collection and it lined up very well with what we would expect in terms of yield response to fungicides.”

“It was nice to see that what growers are experiencing in their fields is actually ground-truthing a lot of what we’re measuring in our field experiments.”

The Kansas Wheat Commission provided funding to cover the cost of the doctorate student who served as the boots on the ground collecting this survey over four years. Kansas Wheat also put the grower survey on their website and promoted it through their channels to help garner additional responses.

“The Kansas Wheat Commission was instrumental,” Lollato said. “We needed two things — funds for us to get the work done and disseminating the fact that we were doing that survey.”

The researchers combined this field experiment data with information from a producer survey that covered a wide range of management decisions. The producer survey included variety and fungicide management data from 654 commercial Kansas wheat fields across three growing seasons — 2016, 2017 and 2018. Around 55 percent of the fields in this survey applied one or more fungicide applications, compared to the other 45 percent that had no applications. Fungicide applications also varied on the weather that growing season, with more producers applying fungicide in wet years compared to dry years.

The survey data also showed the majority of growers are choosing varieties that are either resistant or intermediate for leaf and stripe rust. Roughly 80 percent of fields in the survey were planted with some stripe rust resistance and 65 to 70 percent with some resistance to leaf rust.

“We see the growers are using both tools that they have,” Lollato said. “Good genetic resistance that can actually reduce the need for the fungicide, but also based on weather conditions, they are taking data to the decision of the application.”

Overall, researchers determined an average of 7.8 percent yield gain for wheat fields with a foliar fungicide application. Genetics plays a key role in the range of this yield gain. Wheat varieties with less built-in resistance to stripe or leaf rust benefited more from fungicides than resistant or intermediate-resistant varieties. The average yield gain for resistant varieties was 5.6 percent, compared to 6.9 percent for intermediate resistance and 16.9 percent for susceptible varieties.

“On average, we saw around seven percent yield gain on resistant-to-intermediate resistant varieties and up to 16 percent on susceptible varieties,” Lollato said. “If that’s the average, then some years we were able to gain a lot more than that. Depending on weather conditions and the types of varieties growers are selecting, there’s an opportunity to have quite a bit of yield benefit from those fungicides. In some years, those gains are up to 30 to 40 percent in resistant varieties and up to 90 percent in susceptible ones.”

This overall average, however, was just the beginning of their findings. The researchers dug into the data even further and determined the underlying factor driving this response was a gain in kernel weight. Following a fungicide application, the wheat plant was able to maintain a heavier kernel — a measurement called thousand kernel weight. Lollato explained the fungicide application increased this specific measurement, which resulted in higher yields.

Because the experimental data set went back to the 2008 growing season, researchers were also able to compare the magnitude of yield gain during both dry and wet years.

“From a weather perspective, we wanted to know what is driving that response,” Lollato said. “Essentially we found that the best indicator of whether we’re going to have a good response to fungicide or not was cumulative precipitation during that April and May timeframe.”

In the grower survey data, researchers also found greater fungicide yield benefits in wetter growing seasons than dry seasons. The yield was about 15 bushels per acre greater on fields receiving a fungicide application in wet years as compared to about six bushels per acre in dryer years. Additionally, researchers saw an interaction with the planted wheat variety’s genetic resistance to disease, especially stripe rust. Fields that did not receive fungicide, but were planted to a resistant variety, still realized a yield gain of roughly five bushels per acre.

Additionally, K-State researchers are now using this model — combining field experiment data with producer survey work — to answer questions on other management decisions. Next up is a study on the previous crop for the field, but future research could cover planting date, sulfur applications and many more applications that will benefit researchers and producers alike.

Learn more about research supported by the Kansas Wheat Commission at https://kswheat.com/research.