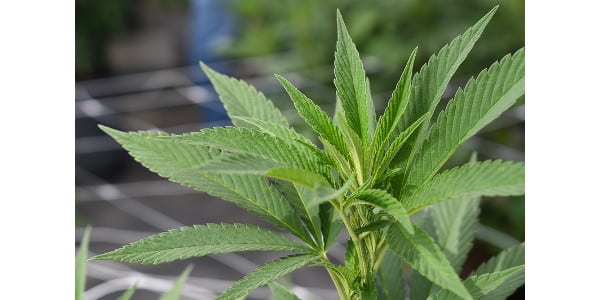 In April 2018, Kansas Gov. Jeff Colyer signed a bill enacting the Alternative Crop Research Act, leading to the legal production of industrial hemp in the state. Kansas is one of 42 states approved to grow the crop; the Kansas Department of Agriculture reported that there were 207 Kansas growers in 2019.

None of those growers, however, had information available to show best practices for growing industrial hemp in Kansas soils.

“It’s a brand new crop that nobody in Kansas should have legal experience growing,” said Jason Griffin, director of the John C. Pair Horticultural Center, one of three sites where K-State’s research trials have taken place this year (research was also conducted at K-State facilities in Colby and Olathe). “Since it was new, we needed baseline information on how to grow the crop successfully.”

Griffin noted that “99% of the people growing industrial hemp in Kansas this year were growing for cannabidiol,” better known as CBD. Cannabinoids have high interest among consumers because of their purported medical and therapeutic benefits in humans and companion animals.

CBD and other varieties are legal to grow if they produce less than .3% tetrahydrocannabinol, or THC. If the plant’s THC level is greater than .3%, it is considered marijuana and not legal to grow or possess in Kansas.

“We knew that Kansas farmers wanted to get into this industry,” Griffin said, “and our job is to conduct research to help farmers be successful with the crop.”

Griffin and the research team at the John C. Pair center planted seven CBD varieties, including five in high tunnels, which are plastic-covered structures that provide some protection from the environment compared to open field conditions.

“It’s well-known that high tunnels in the specialty crops arena have certain advantages over crops grown outside,” Griffin said. “For our purposes, it reduced solar radiance, reduced wind and reduced pest presence. But, specifically for hemp, we had our high tunnel completely enclosed in insect screens, which is a really fine netting. We wanted to see if the insect screen would reduce the amount of pollination inside the tunnel. And it appeared it did.”

That caused problems for the hemp varieties that K-State grew outside, Griffin said, noting that pollen can travel as far as three miles. “I think it would be very difficult to have a large-scale, outdoor CBD production system successfully without somehow protecting those plants from pollen.”

Because they were protected from insects and other pollinators, “the plants inside the high tunnel were just superior,” Griffin said. “In that protected environment, they were larger and had more flower buds. Because they had more buds, they had a higher CBD content.”

K-State’s work also looked at various production systems, including growing the plants with organic and conventional fertilizer. Researchers also looked at the potential of growing industrial hemp for fiber and grain.

The university’s work will continue in 2020, Griffin said. “This was our first year,” he said. “We probably made some mistakes and we’ll probably improve as any grower might as they get more experience with a crop.”