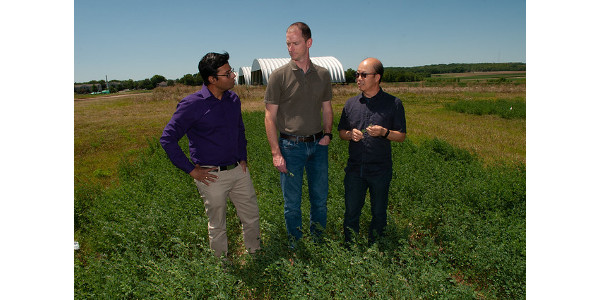 MANHATTAN, Kan. — Kansas State University researchers are ready to launch a study on an alfalfa variety that could be more pleasing on cow’s stomachs and producers’ bottom line.

Doohong Min, associate professor of agronomy, is leading a team from K-State and the University of Nebraska which recently received $500,000 from the U.S. Department of Agriculture’s National Institute for Food and Agriculture to test growing conditions and conduct feeding trials with low-lignin alfalfa.

Lignin is the component which gives strength to the alfalfa plant, but limits digestion in cows and other ruminant animals. At least two recent alfalfa varieties are now on the market with low- or reduced-lignin properties, Min said.

“Animal performance, especially milk and meat, is heavily related to digestibility,” Min said. “That’s why it’s so critical to lower the lignin content in alfalfa.”

In the United States, alfalfa has a cash value of $9.5 billion annually. Kansas growers dedicate an estimated 610,000 acres to alfalfa each year, a substantial share of the 1.68 million acres grown in the United States. Min said every state grows some alfalfa, as well as numerous countries. It is sometimes called the “Queen of Forages” due to its reputation as a feedstuff for livestock.

“In the past, once the alfalfa starts to blossom, called the flowering stage, then the forage quality starts to go down dramatically,” Min said. “This new trait of low-lignin alfalfa can maintain nutritive value for 7-10 days after blossoming, while increasing the biomass (or amount that is available for feed).”

Under perfect conditions, that would translate to greater opportunity for farmers to harvest highly digestible alfalfa that provides the necessary nutrition to cow herds. But there is very rarely a “perfect” farming season, so K-State researchers will be studying how the low-lignin varieties perform under a variety of environmental conditions.

“There is always going to be some shortages of water, so we need to know how these shortages are going to affect the yield and the quality,” said Krishna Jagadish, an associate professor of agronomy at K-State.

Jagadish will be growing the low-lignin alfalfa varieties under rain shelters, where the amount of moisture the plant receives can be controlled. The goal, he said, is to determine if the plant can maintain low levels of lignin in all moisture conditions.

“If farmers are able to reduce a certain amount of water, especially in southwest Kansas (where two-thirds of the state’s alfalfa is grown), then there is the potential for water savings,” Min said. “And since this is a low-lignin alfalfa, the dairy producers can produce more milk because of higher digestibility. Eventually this will result in higher farm profitability and sustainability.”

Barry Bradford, a K-State professor of animal science, and Paul Kononoff, a professor of dairy nutrition at the University of Nebraska, are tasked with proving the nutritional value of low-lignin alfala to cows.

The duo will conduct feeding trials with 60 lactating Holsteins and 12 lactating Jerseys to determine if low-lignin alfalfa has an impact on diet digestibility or yields of milk, milk fat and milk protein.

Bradford said the feeding studies are important because virtually no work has been done in the U.S. to determine the effects of low-lignin varieties: “What nutritionists have been forced to do is take what we know about feeding corn silage and apply that to feeding alfalfa,” he said.

He added that the low-lignin varieties could be sold at a higher price if it’s shown that they can, indeed, improve the animal’s production. “Once we know what the likely digestive effects are, and if we are paying more for it, we can then determine if it leaves you with extra revenue,” Bradford said.

He adds: “Alfalfa is the second most important forage that we feed dairy cows in Kansas, after corn silage. We definitely need to determine how important these varieties are.”

Min said the two-year study begins in just a few weeks when the research team will plant low-lignin alfalfa. “We are very excited,” he said, “but at the same time, we have a lot of work to do.”