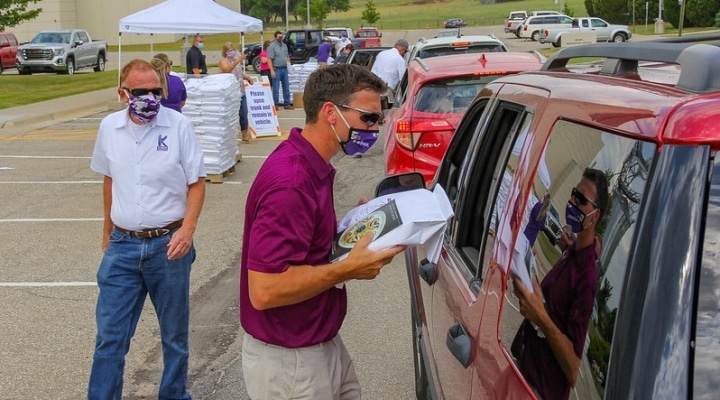 Volunteers distributed 1,500 bags of flour, milled at the Hal Ross Flour Mill on the K-State campus, on Thursday, June 18. The Department of Grain Science and Industry sponsored the event along with the Kansas Wheat Commission and Kansas Association of Wheat Growers. (K-State)

Gordon Smith, head of the Department of Grain Science and Industry, said the event was held to help people who may be struggling to obtain basic food supplies.

Shortly after the event began, a line of cars stretched about 300 yards from the flour mill to Manhattan’s Kimball Avenue. By the time it finished just before 7 p.m., Smith estimated that 1500 cars came through the impromptu drive-through, each receiving a 10-pound bag of freshly-milled, Kansas flour.

“We knew nothing about how this was going to go,” said Smith, noting this is the first time the Department of Grain Sciences and Industry has conducted a free distribution of flour.

About 20 volunteers – including K-State police officers, faculty and staff; employees from the Kansas Wheat Commission and the Kansas Association of Wheat Growers; and Kansas Secretary of Agriculture Mike Beam and others from that agency — helped to guide the cars along the drive-through distribution, all wearing masks and observing social distancing while loading the flour into cars.

Based on the number of bags distributed, they were handing out just over six bags per minute – or one every 10 seconds — for four hours.

While the global pandemic limited most operations on the K-State campus, the Hal Ross Flour Mill was getting needed updates and repairs. On re-opening the mill, several faculty members and Smith had an idea to help fill the void of short flour supplies in local grocery stores.

Working in partnership with the Kansas Wheat Commission and the Kansas Association of Wheat Growers – groups supported by Kansas wheat farmers — the university milled 20,000 pounds of wheat, a process that took about 10 hours.

“We had a guy come by who is in the army and he tells us, ‘I think of this like military service…it’s pure service to the community,’” Smith said. “That was really nice to hear.”

K-State’s Department of Grain Science and Industry offers the world’s only bachelor’s degrees in milling, bakery and feed science and management. For more information on those and other programs, visit https://www.grains.k-state.edu.