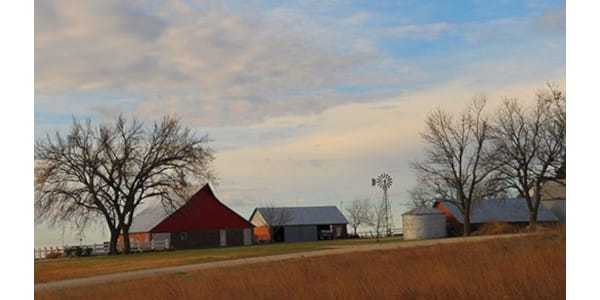 Researchers have found that income gained from energy produced on U.S. farms has neither a positive or negative effect on agriculture. (File photo)

MANHATTAN, Kan. — A Kansas State University agricultural economist has published findings from a study looking at the impact of income gained from energy produced on the farm.

Jenny Ifft, an agricultural policy specialist with K-State Research and Extension, said while energy income is typically beneficial to the broader rural community, there seems to be no difference in the investments that farmers are able to make as a result of energy produced on their land.

“I’m just looking at agriculture here,” Ifft said. “Income from energy production can definitely help the local economy. There is a lot of evidence that energy income does create jobs and wealth locally, and it’s certainly going to help the rural families that own the land. It’s just about whether or not it has much of an impact on agriculture.”

Listen to an interview by Eric Atkinson with Jenny Ifft on the weekday radio program, Agriculture Today

Ifft noted that the U.S. government reported in 2019 that the country was a net energy exporter, “meaning that in the U.S. we produced more energy than we consumed.”

That was a result of natural gas and renewable energy production, Ifft said. It was the first time since 1952 that the U.S. was a net energy exporter, “and it is an ongoing trend,” Ifft said.

“What’s interesting to me as an agricultural economist is that a lot of this (growth) is happening on farmland,” she said.

Kansans quickly associate renewable energy in the state with the bevy of large, white wind turbines dotting many areas of the state, including a long stretch along Interstate 70 in the central and western regions.

But America’s energy growth began a long time ago, and includes vast expansion in natural gas. As an example, from 2000 to 2012, nearly 7 million acres of U.S. farmland – an area that is about the size of the state of Massachusetts — was converted to drilling pads and related uses for shale gas production.

Ifft said that during a similar period – 2008 to 2017 – “wind power tripled, and utility scale solar grew by a factor of 60.” She added, though, that these sources started from a much smaller base than oil and gas production.

“There is one important point to make: Even if we had all energy production on farmland, it’s not a threat to food security,” Ifft said. “We definitely have the capacity to do both. But that doesn’t mean there’s not conflict. In fact, there’s a lot of local conflict in rural areas when you see energy going onto farmland.”

Ifft’s study of the impact of energy income on the farm matched responses from farmers regarding their access to credit, the investments they’re making into the business, and whether they are drawing income from energy production or not. More than 30,000 farms provided responses for the study.

Ifft admits she was surprised…at first. “It doesn’t support the broad claims that energy income is going to help the farm economy. On the other hand, there is no evidence that it harms the farm economy, either. It’s sort of neutral in that respect.”

She pointed to a recent study about Oklahoma farms that increased farmland investment after receiving energy income. She said individual cases could represent positive or negative examples of farmers profiting from energy income.

“One needs to be really careful with those claims,” Ifft said. “You are going to continue to hear stories about individual farms that have been really helped a lot by energy income. That’s wonderful. But it’s not the average effect that we find in our study.

“You can also think about it this way. If you have additional income, first of all it has to be high enough. Farming is very capital intensive; if you think about the cost of a new or even a used combine, it’s going to take a lot of energy income to make that happen, or even to make the down payment.

“On top of the money that’s needed, you need money (from energy sources) to be in a place where the farms currently don’t have good access to credit, and they have potential for energy production. One way to look at it is it’s really hard to get all those pieces together to see that impact.”

Ifft’s study is published in the journal, Energy Policy, and can be accessed online. The study was funded by the Cornell Atkinson Center for Sustainability.