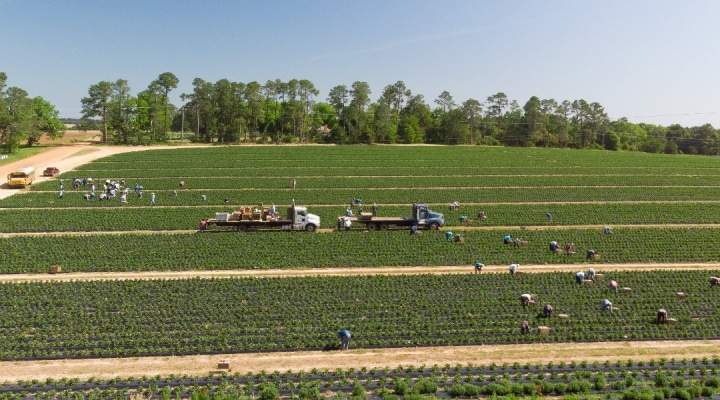 The justices were hearing arguments in a case involving a California labor regulation put in place in 1975, following the efforts of labor leader Cesar Chavez. The regulation grants unions access to farms and other agriculture businesses in order to organize workers for up to three hours per day, 120 days per year. (U.S. Department of Agriculture, Public Domain)

WASHINGTON (AP) — The Supreme Court appeared ready Monday to side with two California agriculture businesses that want to bar labor organizers from their property, a case that could be another blow to unions.

The justices were hearing arguments in a case involving a California labor regulation put in place in 1975, following the efforts of labor leader Cesar Chavez. The regulation grants unions access to farms and other agriculture businesses in order to organize workers for up to three hours per day, 120 days per year.

During arguments the court heard by telephone because of the coronavirus pandemic, Justice Brett Kavanaugh said the court had decades ago considered how to balance the rights of unions and property owners. The court concluded that there could be “no access unless you can show that there are no alternative means of communication that exists,” he said.

And Justice Clarence Thomas wondered whether there was any difference between the regulation and a requirement to allow National Guard troops or state police to train on private property during non-business hours for up to three hours a day, 120 days a year.

While the access regulation is unique to California, unions and others say ruling for the businesses could threaten regulations that allow government to access private property to conduct workplace health and safety inspections, among other things.

If the court does side with the businesses, it would be another hit to unions by the court under Chief Justice John Roberts. In 2018, the court’s conservative majority overturned a 41-year-old pro-union decision that had allowed states to require that public employees pay some fees to unions that represent them, even if the workers choose not to join.

Still, it’s unclear how much unions would be affected by a ruling for the businesses. California says union organizers use the regulation “sparingly,” only five times in the 2019-2020 fiscal year and 24 times in 2018-2019. But the United Farmworkers of America told the justices that the regulation, which survived a legal challenge in state court after it was put in place, is more necessary now than ever. Farmworkers are increasingly indigenous workers from Mexico and the only effective way to communicate with them is in person at their job sites, the union said.

In court documents filed before President Joe Biden’s inauguration, the Trump administration had urged the justices to side with the businesses. The Biden administration, however, changed the government’s position.

The case before the justices involves Fowler Packing Company in Fresno, which ships grapes and citrus, and Cedar Point Nursery in Dorris, near California’s border with Oregon, which grows strawberry plants for commercial growers.

In October 2015, union organizers used California’s regulation to go on to Cedar Point’s property. Video of the incident shows one person with a bull horn and demonstrators waiving red flags as they walk by workers.

Cedar Point owner Mike Fahner describes the regulation giving access to his private property as un-American and “just wrong, not the country we live in.” He says he keeps his facilities clean and pays his 400 seasonal workers well, averaging $17.50 an hour in 2015, when union organizers arrived unannounced at his property.

In Fowler Packing Company’s case, union organizers complained in 2015 when they said Fowler, which employs more than 2,000 people, interfered with their ability to access company property for three days. That complaint was later withdrawn.

The businesses argue California’s regulation is unconstitutional but also outdated and unnecessary when unions can now reach workers many ways, including via smartphone and radio.

A decision is expected by the end of June, when the court traditionally breaks for the summer.