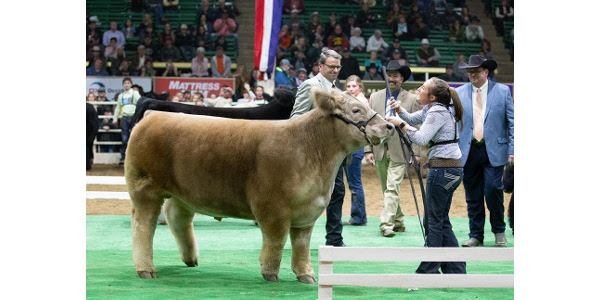 DENVER — The 2020 Auction of Junior Livestock Champions set record numbers again this year. The day began with the Grand and Reserve Champion Steers making an appearance for high tea at the Brown Palace Hotel, which has been a tradition for the last 75 years.

The money invested supports these young students who poured countless hours into raising their high caliber animals. Many plan to use the auction funds for their collegiate educations and future in agriculture. A portion of their proceeds support the National Western Scholarship Trust, which funds scholarships in agricultural studies and rural medicine at colleges throughout Colorado and Wyoming. This year, 100 students received funds to aid their education.

The top six Junior Livestock animals were auctioned off live on 9NEWS at 6:30 p.m., and the exciting results are as follows:

The Grand Champion Steer weighs 1,330 pounds and sold for an all-time high of $155,000 to Ames Construction Company. The steer was shown by Ashtin Guyer. Ashtin attends Lakeland College in Illinois where she is studying AgriBusiness.

The 278-pound Reserve Champion Hog, Zeke, was sold to Brannan Sand & Gravel for $36,000. The hog was shown by Mikala Grady from Grandview, Texas.

Denver Metro Chamber of Commerce purchased the Reserve Grand Champion Lamb for a new record of $40,000. The lamb was shown by 16-year-old junior exhibitor Blake Skidgal from Pawnee, Okla. Blake hopes to become a sheep farmer.

17-year-old Cody Sells sold his Grand Champion Goat for $29,000 to Babson Farms. Cody is from Taylor, Texas, and he plans to attend Texas A&M University.

The Reserve Grand Champion Goat named D.G. sold for $22,000 to Hutchison Western. D.G. was shown by 18-year-old Aspen Martin. Aspen’s favorite experience in the show ring was being the 2016 champion.