Home / Ohio / Junior beef exhibitors succeed at Ohio State Fair
A new user experience is coming! We'll be asking you to login to your Morning Ag Clips account March 1st to access these new features.
We can't wait to share them with you! Read more here. 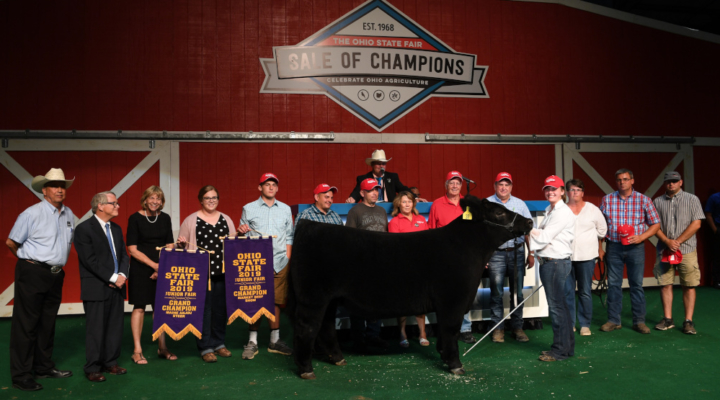 MARYSVILLE, Ohio — The Ohio State Fair is the summer’s highlight for many youth livestock exhibitors, and this summer was no exception for Ohio’s youth who won top honors at the Ohio State Fair, July 24-August 4.

The Reserve Champion Market Beef Animal, exhibited by Delaney Jones, Allen County, Ohio, was purchased for a record setting $56,000 by Steve R. Rauch Excavation and Demolition, Mark Kvamme and family and Meijer. Jones will receive $11,000 with the remainder benefiting the Youth Reserve Program. To date, the Youth Reserve Program has awarded over $3.5 million to more than 40,000 youth exhibitors.

The Ohio Expositions Commission awards scholarships to junior beef exhibitors looking to further their education. This year, three scholarships were awarded to Caroline Blay, Portage County; Alana Hesler, Adams County; and Abbygail Pitstick, Madison County. The scholarships were made possible by the Youth Reserve Program and awarded at the Sale of Champions.

Jeff Dameron, Illinois, and Chris Cassady, Iowa, evaluated the breeding heifers over a period of two sessions. The top five animals of the events were as follows:

The Outstanding Breeding Beef Exhibitor (O.B.E.) and Outstanding Market Exhibitor (O.M.E.) awards are based on the exhibitor’s combined performance of skillathon, showmanship and class placing. The O.B.E. award recognizes the top three breeding exhibitors from either session before the selection of the champion breeding heifer and champion market animal. The O.M.E. award recognizes an exhibitor in each age division, 9-18, and the top three are announced at the Sale of Champions on the last day of the fair.

For complete beef results from the Ohio State Fair, be sure to watch for the Early Fall issue of the Ohio Cattleman.