Home » Jumping worms are real and a threat to the garden 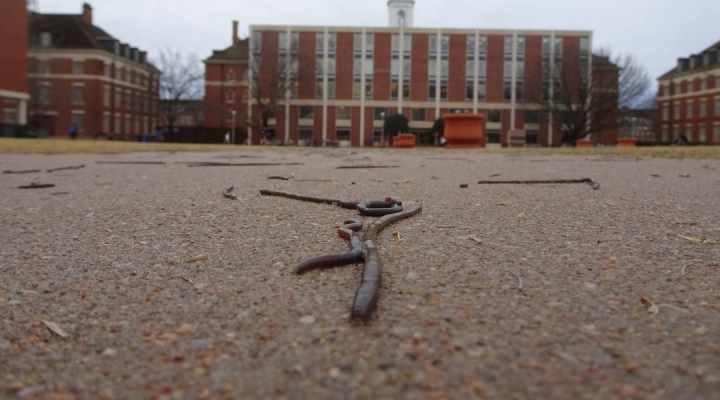 The Asian jumping worm and other non-native earthworms have negative effects on the environment. (Photo provided by Scott Loss)

STILLWATER, Okla. — As gardeners spend time in their flower beds and landscapes, they might uncover some worms in the soil – and not just any worm, the invasive Asian jumping worm. Unlike native earthworms, this and other non-native earthworm species, can wreak havoc in the soil. And yes, they do jump.

“While no systematic surveys have been done, I have found them around the OSU campus in Stillwater, as well as a few spots in eastern Oklahoma,” Loss said. “Although not currently a significant concern in the state, these aren’t your regular earthworms. They multiply more rapidly than other species, but the real difference is they can devour organic material quickly, which can alter the soil structure and chemistry of land. Their movement also differs in that they move and thrash around like a snake.”

In addition to the Asian jumping worm, Loss said other species of non-native earthworms, primarily originating from Europe, are established throughout North America, including Oklahoma. These groups also have documented negative effects on the environment.

Most earthworms burrow in the soil, but jumping worms and other non-native species, such as those in the genus Aporrectodea, feed on or near the surface of the soil and may have negative effects on the soil and plant growth, said David Hillock, OSU Extension consumer horticulturist.

“They like to feast on leaf litter and are known for leaving castings (earthworm feces) behind,” Hillock said. “Mulch is another favorite food source. Be aware they can eat two to three times their body weight every day. Because of their eating patterns, jumping worms and other non-native species can cause an imbalance in soil nutrition, which can disrupt the natural ecosystem and home landscapes.”

Removing the surface organic matter isn’t a good method of control because that poses a risk to other organisms by eliminating their food source. Hillock said removing leaf litter also decreases the habitat for ground-nesting birds and other species who find refuge there.

In addition, jumping worm activity can cause changes in the physical characteristics of soil, which can contribute to soil erosion and changes in water permeability. Soil infested with jumping worms resembles coffee grounds and deprives other plants of essential nutrients.

Right now, Hillock said education is the key. Jumping worms look similar to any other earthworm except for the lighter-colored band near the anterior end of the body and a more shiny/smooth appearance. Unfortunately, there is not currently a viable method of control. Compounds available that might work against jumping worms would also kill other beneficial earthworms.

The most important form of management is preventing the worms from establishing in the first place. This can be done in the following ways:

“While we can’t realistically prevent use of these species for bait, we do recommend disposing of unused bait rather than dumping on the ground and establishing a new invasion,” he said.

Loss provides more information about invasive worms on this episode of OSU Agriculture’s Oklahoma Gardening television program, as well as on his website.