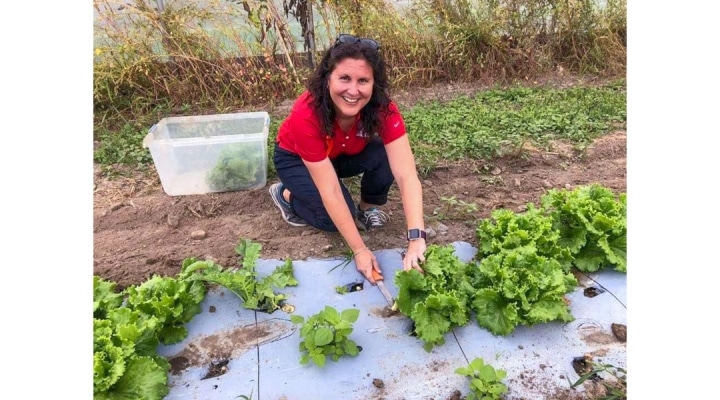 ITHACA, N.Y. — As the associate dean for land grant affairs in the College of Agriculture and Life Sciences, Julie Suarez is recognized across the state as an advocate for New York agriculture and a trusted partner in furthering the outreach conducted by Cornell CALS and Cornell Cooperative Extension (CCE). On Monday, Jan. 31, that recognition hit a formal note as Suarez was named CCE’s 2021 Friend of Extension.

In presenting the award during a virtual ceremony, CCE Director Chris Watkins said that while Suarez’s primary responsibilities of facilitating partnerships with stakeholders and policymakers to further Cornell’s Land-Grant mission lie within CALS, her role, by definition, is deeply connected to CCE and the communities it serves. “Julie lives and breathes New York agriculture,” he said.

In addition to her frequent participation in CCE programming, including learning how to raise her beloved backyard chickens, Suarez has a deep history with extension. “As a kid who moved all over the place with her dad’s military appointment, I remember being a sixth grader in Savannah, Georgia who saw a bamboo farm, picked berries, and learned to ride a horse as part of 4-H,” she said during her acceptance remarks. “That gave me confidence and helped me build friendships in yet another new community, which was invaluable.”

In her time with CALS, Suarez has helped spearhead successful efforts to increase state funding streams for CCE, including re-invigorating organizational visits to Albany to share CCE impact stories with state legislators. “As Director, I feel very blessed to have Julie in this role,” said Watkins. “And I know that our county executive directors and educators who rely on Julie’s advice and leadership feel the same way.”

“Her knowledge and experience of public policy has been invaluable, especially for those of us who work at the local level,” wrote Kevin Jordan, executive director for CCE Jefferson County. “Julie has provided outstanding leadership and support that has raised awareness and better informed our state-wide leaders about the positive impacts Cooperative Extension has on the residents of New York state.”

Lucy T. Joyce, executive director for CCE Orange County, credited Suarez for helping her navigate legislative changes that led to the construction of her organization’s educational campus. “Julie brought her skillful leadership, enthusiasm, and commitment to the project, guiding me through every step of the three-year effort,” she said. “To me, Julie is a rock star.”

Said Benjamin Houlton, Ronald P. Lynch Dean, Cornell CALS: “Throughout her career, including the past nine years with Cornell CALS, Julie has championed CCE’s vital work in support of residents, businesses and communities across New York state. As a powerful voice for applying science-based solutions to improve the lives of New Yorkers and to boost our food and farming sectors, Julie plays a critical role in extending CCE’s valuable efforts to every county of the state.”

Former Ronald P. Lynch Dean of Cornell CALS, Kathryn J. Boor, who is the Dean of the Graduate School and Vice Provost for Graduate Education at Cornell, wrote: “Through her words AND actions, throughout her entire career, Julie Suarez has been a powerful champion for Cornell Cooperative Extension (CCE). She has advocated successfully for increased funding for many CCE programs; she has won funding to support renovations of buildings that support CCE functions; and she has been a participant in many CCE programs so that she can speak first-hand about the value of CCE to our state’s citizens … Simply put, NYS’s extension programming would be a shadow of itself without Julie Suarez.”

New York State Agriculture Commissioner Richard A. Ball used the word “ubiquitous” to describe Suarez’s contributions to N.Y. agriculture. “Julie is committed to furthering major agricultural initiatives launched by the state through her participation on the Pollinator Protection Task Force, the Diversity and Racial Equity Working Group, and so many more, while bridging connections between the exceptional minds and talent at both Cornell University and CCE with our stakeholders to better the lives of not only those in the industry, but also our consumers.”

In accepting the award, Suarez was thankful, yet deferential. “I am always in awe of the incredible work that occurs within county extension associations, frequently with little resources, but with an abundance of passion and commitment in your hearts,” she said. “When I think about extension, I think about how many people’s lives are touched by extension, including my own. It is my own honor and privilege to serve CCE as they do real work that matters in New York communities.”

R.J. Anderson is a writer and communications team leader at Cornell Cooperative Extension.