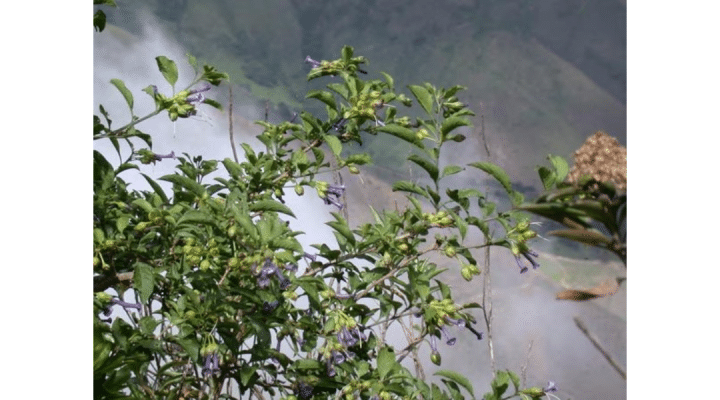 WASHINGTON — Hidden beneath the delicate, red skin and juicy flesh of a tomato is a wealth of nutrients and genetic makeup. With recent research on the first genome of a species in the tomatillo tribe (part of the tomato family), we now have a better idea of how this vital plant family came to be.

Put simply, a genome is a complete set of DNA (genetic material) in a plant. The genome contains all the information needed for a plant to develop and grow. When scientists assemble genetic sequences to build an entire genome– a lot like completing a puzzle – this helps them predict things like how a plant will grow (straight or crooked) and what the fruit might look like (thin or thick skinned.) This information is important for understanding how different varieties come to be and is key for breeding better crops.

“The tomato family is simply the most fascinating family. It consists of plants that are major crops, invasive weeds, important medicines, beautiful bedding plants, and many wild species that are crop relatives,” says Stacey Smith, a professor at the University of Colorado-Boulder.

This research was published in The Plant Genome Journal, a publication of the Crop Science Society of America.

Smith led the work on the sequencing the genome of Iochroma cyaneum, a wild shrub in the tomatillo tribe of the tomato family. Iochroma displays striking blue flowers but isn’t widely grown. Scientists like Smith can learn how important plant families evolved by collecting many genomes from different sub-species.

“Unlike most plants in the family with sequenced genomes, it is not a crop species. It’s also the only member of its entire tribe with genome assembled to the level of chromosomes,” says Smith. These unique traits make the new genome even more valuable to understand how the broader family evolved.

After sequencing the Iochroma genome and assembling the sequences into chromosomes like a puzzle, Smith’s research team compared it to other members of the family. The broader tomato family has almost 3,000 species. Some of these species, like belladonna, are poisonous to humans. Forty species have been domesticated, which include potatoes, eggplants, and hot peppers, in addition to tomatoes. All of these plants belong to the family are also called “nightshades.” In the puzzle example, this means that they all have a similar set of puzzle pieces, up to a point. From there, their puzzle pieces are different.

The genome told researchers that Iochroma was part of the family known as the “berry clade.” This subgroup forms “berries” which are juicy fruits with many seeds, like tomatoes and hot peppers. But the scientists were surprised to find that the family relationships within this clade were far from clear. The genetic evidence was uncertain about which species were most closely related. Biologists call this kind of disagreement “discordance.”

“This kind of disagreement often arises when lineages reproduce quickly within different species,” says Smith.  “That may be what happened tens of millions of years ago when fleshy-fruited berries from this family burst onto the scene. As a result of this discordance, we can’t make definitive statements about which species are more closely related.”

Still, the new genome gives a new look into the evolution of the family. One clue is how the genes have moved around. As species evolve, genes can move from one chromosome to another. Plants adjust efficiently to these changes. But Iochroma offered up a surprise. Its genome shuffling didn’t closely resemble any other sequenced genome, meaning the shrub has had its own unique evolutionary path.

“With the addition of the lochroma genome, we are working towards understanding how genes have been shuffled around during the evolutionary history of the berry clade,” says Smith. “We have only scratched the surface in terms of understanding how this diversity evolved.”

While the new research won’t produce a tastier tomato or tangier tomatillo right away, Smith says the family already offers a lot of flavors to the bold gardener. And, perhaps, an appreciation for the diversity offered by evolution.

“I would encourage anyone who is curious about nightshades to get to know some of the lesser-known crops — try out golden berries, ground cherries, pepinos, wonderberries, or naranjillas!” says Smith. “There are even species that can be eaten as greens. Many of these will happily grow in northern climates and bring a lot more flavor than any tomato you can find on the grocery store shelf.”

Funding for this research was supported in part by NSF-DEB 1355518.