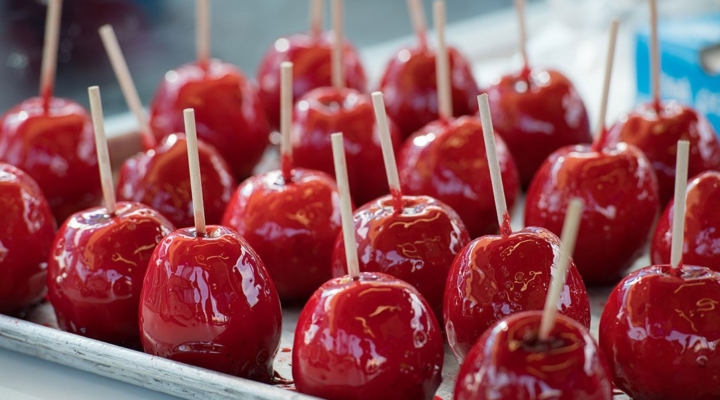 The 15th annual Big Tex Choice Awards, presented by Metro by T-Mobile, will be held at 2 p.m. on Sunday, August 25 in the historic Tower Building at Fair Park. (Photo credit: Kevin Brown/State Fair of Texas)

DALLAS, Texas — With the fryers sizzling, the grills firing up, and the State Fair of Texas right around the corner, it’s time to discover who will name the winners of the 15th Annual Big Tex Choice Awards.

This year, a total of 49 entries were submitted, then narrowed down to 33 semi-finalists — 20 savory and 13 sweet entries. Of these 33 entries, 10 entries will compete live in the final round at this year’s Big Tex Choice Awards event. The members of the judging panel will be faced with the difficult task of deciding which food concoctions will take home the titles of“Best Taste – Savory,” “Best Taste – Sweet,” and “Most Creative.” The 2019 Big Tex Choice Awards presented by Metro by T-Mobile, which has officially sold out, will host a master of ceremonies, featuring a panel of distinguished judges whose personalities range from local celebrities to renowned chefs. In addition, one lucky fairgoer will be chosen at random for the opportunity to be one of the judges on the day of the event.

Without further ado, the State Fair of Texas proudly presents this year’s emcees and judges who will serve as hosts and taste-testers for the big event:

Born and raised in North Oak Cliff, Michelle has been a State Fair of Texas fan from the womb – there isn’t a year she hasn’t attended the Fair. She has been a familiar voice on the radio in Dallas/Fort Worth for almost 15 years and has been recognized for having one of the best radio shows in Dallas by D Magazine. Over the years, she’s earned nominations from the Academy of Country Music, Country Music Association, and is a current finalist for the National Broadcasters Association Marconi Radio Award. Michelle continues to give back to the community through nonprofit organizations such as Make-a-Wish, American Red Cross, and Communities in Schools. You can hear Michelle on Monday through Friday, 10 a.m. to 3 p.m. on New Country 96.3. She’s a lover of all things music and all things (fried) food.

Born and raised in Dallas, Donovan Lewis has been enjoying the great State Fair of Texas since he can remember. As a matter of fact, his first date with his wife of 23 years, Yolanda, was at the State Fair. Donovan has been working at 1310 The Ticket since 2006, most recently with Norm Hitzges on the Norm & D Invasion since August of 2016. Following graduation in 1993 from East Texas State University (now known as Texas A&M Commerce), Donovan got his first job in radio at 570KLIF. His comfort food consists of a Fletcher’s Corny Dog, a fried cheesecake, and a sweet tea from the Fair.

Eric Johnson – Mayor of the City of Dallas, Texas

Returning as a judge this year, Eric Johnson was elected as Mayor of Dallas in June 2019. He was born in Dallas, Texas in 1975 to working class parents and raised in West Dallas and Oak Cliff. He attended Dallas Independent School District schools through the first grade before earning a scholarship to Greenhill School through the Boys and Girls Clubs of Greater Dallas. After graduating high school, Mayor Johnson earned his undergraduate degree with honors from Harvard University before earning a graduate degree from Princeton University and a law degree from the University of Pennsylvania Law School. Mayor Johnson and his wife, Nikki, have two sons, William and George. He is a member of the Mountain View Church of Christ. Mayor Johnson has been a practicing lawyer in Dallas for over fifteen years. He is a former member of the Texas House of Representatives, where he represented Dallas from 2010 to 2019. During his tenure in the Texas House of Representatives, Mayor Johnson served on 20 prominent legislative, including Chairman of the Dallas Area Legislative Delegation.

Adam Bazaldua was elected to the Dallas City Council in June 2019 and is the youngest person to ever serve on the Council. Adam is a dedicated husband and father, a local teacher, and a community advocate. Adam is focused on the need for neighborhood safety improvements such as solving the City’s growing homeless population and attracting local businesses that better serve each neighborhood’s needs. He is a dedicated advocate for economic growth that benefits the existing residents of the community.

At the early age of thirteen, Samir Dhurandhar developed a passion for cooking. After graduating from the famed Culinary Institute of America in 1992, he held executive chef positions at John Harvard’s Brew House in Long Island, Heartland Brewery, and Sfuzzi’s in New York before coming to Dallas in 1999 to open Nick & Sam’s Steakhouse as the executive chef. Award-winning credits include the American Institute of Wine & Food’s Chef 2000 award, the 2000 Best Caesar Salad in Dallas awarded by the American Institute of Wine & Food. Chef Samir also was recognized for having the best wine and food matched menu during Dallas’ largely popular culinary event, Restaurant Week, sponsored by radio station KRLD. Under his watchful eye, Nick & Sam’s wine list has received numerous annual designations of Awards of Excellence by Wine Spectator Magazine and is a 2008 winner of the American Academy of Hospitality Science’s Five Diamond Award.

Always one to add a little levity to the conversation, Chad often describes Café Momentum as, “taking kids out of jail and teaching them to play with knives and fire.” With levity aside, it’s this charisma and passion to teach life, social, and employment skills to Dallas’ most at-risk youth that makes Houser a hit with everyone from philanthropists to dinner-goers to the young people participating in the program. After 17 years as a chef, Chad sold his partnership of Parigi Restaurant to devote his full attention to the role of executive director of Café Momentum in 2012. In the community, Chad has previously served as president of the board of directors for Dallas Farmers Market Friends and is also a member of the El Centro College Food and Hospitality Institute “Hall of Fame.” In 2011, he received the Edible Dallas/Fort Worth “Local Hero – Chef” award, and in 2017 and 2018, Chad was named in the Best 500 Business Leaders in Dallas. He has also been named an “Urban Innovator to Watch” by the New Cities Foundation and one of Good Magazine’s “Good 100,” individuals at the cutting edge of creative impact across the globe.

Texas born and raised, LeeAnne Locken combines her work ethic and fiery spirit of a thoroughbred with true grit and southern charm. Born in Pasadena, Texas and raised in the Houston area by her Grandparents, LeeAnne has been a go-getter right from the start. She began her first career, working the carnival circuit, at the age of 3 and was running her own game by the age of 11. She attended the University of Houston before moving to Chicago to pursue modeling and ended up in Los Angeles where she pursued her passion for acting. LeeAnne is an established author and has written 13 books on inspiration and affirmations. When she’s not acting, modeling, writing, or producing; LeeAnne devotes her efforts to many charities dear to her heart. Today, LeeAnne is recognized for her current starring role on Bravo TV’s hit reality TV series Real Housewives of Dallas.

Restaurateur Kyle Noonan has a vision for creating amazing culinary experiences that electrify the people of Texas and beyond. After graduating from SMU, Noonan had a successful 13-year career, opening and operating locations for Pappas Restaurants. In 2011, Noonan teamed up with Josh Sepkowitz, a former SMU classmate and Wall Street investment banker, to form FreeRange Concepts, a thriving company creating some of the most exciting restaurant concepts Texas has seen yet. Kyle has emerged as a national tastemaker in restaurant innovation while taking the social scene by storm. As president of FreeRange Concepts, Noonan brings his guests unique, unforgettable culinary and social experiences. FreeRange Concepts operates The Rustic, Bowl & Barrel, The General Public, and MUTTS Canine Cantina.

Seasoned culinary innovator, Anastacia Quiñones-Pittman, is Executive Chef at José restaurant. A first-generation Mexican-American and native Texan, Chef AQ, as she is known, brings more than 15 years of acclaimed culinary experience to produce regionally inspired dishes from Jalisco, Oaxaca, Mexico City, and beyond. She was named Best Chef of the Year 2018 for Eater Dallas, also took top title at Dallas Observer Iron Fork 2018 and was featured in the Tacos of Texas docu-series. Chef AQ is a graduate of the Culinary Institute of American in New York, where she worked in the prestigious kitchen of San Francisco Jardiniére under the tutelage of Chef and Co-Owner, Traci Des Jardins. Through her own personal quest for culinary knowledge, Chef AQ has developed skills true to Mexican cuisine that focus on local, seasonal ingredients transformed into beautifully plated designs that will create memorable dining experiences. A firm believer in modern Mexican, she has channeled her passion for creativity to build and layer complex flavors into every bite at José. In her role as executive chef, AQ has developed her own signature Mexican dishes including flavored masas that she created for her pop-up, Tacos de Tacha.

The 15th annual Big Tex Choice Awards, presented by Metro by T-Mobile, will be held at 2 p.m. on Sunday, August 25 in the historic Tower Building at Fair Park. Tickets to the event are sold out. Attendees will get the chance to sample this year’s delicious creations and cheer for their favorites while they compete for the titles of “Best Taste – Savory,” “Best Taste –Sweet,” and “Most Creative.” All proceeds from the event are donated to the Big Tex Scholarship Program, which provides college scholarship students across the Lone Star State.

Stay tuned to the State Fair’s social media on Sunday to follow along with the awards ceremony and find out who will win the most coveted titles in State Fair food. 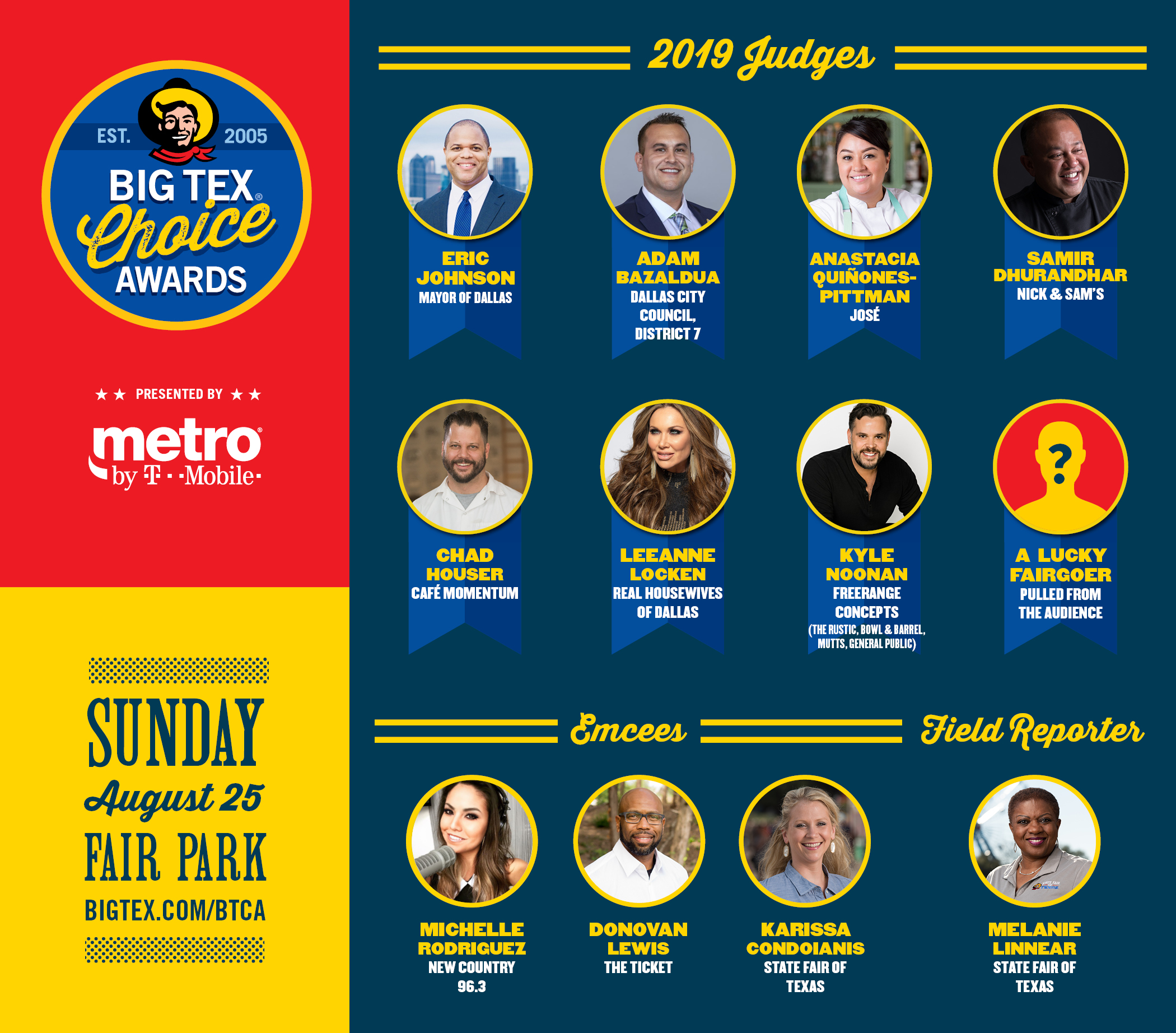