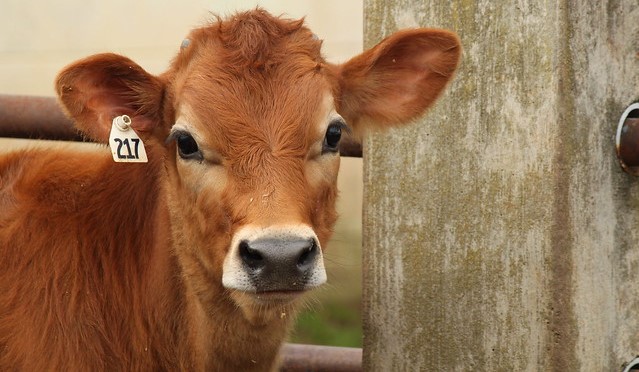 For over 150 years, the American Jersey Cattle Association has maintained identification and performance records for dairy herd owners and delivered services that support genetic improvement and greater profitability through increasing the value of and demand for Registered Jersey cattle and genetics, and Jersey milk and milk products. (egrego2, Flickr/Creative Commons)

The largest exhibition of Registered Jersey™ cattle in the world, the three shows of The All American, will be held November 9, 10 and 11, 2019 in conjunction with the North American International Livestock Exposition in Louisville, Ky.

Keith Topp, Botkins, Ohio, will judge The All American Jersey Show on Monday, November 11. This is his second time officiating in Freedom Hall having placed the National Jersey Jug Futurity in 2017. Topp has judged multiple Jersey and colored breed shows across the U.S. including the 2017 World Dairy Expo Brown Swiss Show; the Big E Brown Swiss Show in 2015; and the Indiana, Missouri, Minnesota and New York State Fair shows that same year.

Judging the 65th National Jersey Jug Futurity on November 10 will be Phillip Topp, Botkins, Ohio. This will be his first time to officiate one of the most prestigious Jersey shows in the world. Three years ago, he debuted in Freedom Hall judging the All American Milking Shorthorn Show. His other credentials include serving as associate judge of the 2018 World Dairy Expo Jersey Show; judging the Illinois, Minnesota and Wisconsin State Fairs that same year; and the 2015 Expo Melgar in Peru. He has also judged various district and county shows.

The National Jersey Jug Futurity is the oldest and richest class for dairy cattle in the world. There are 259 cows currently eligible for the 2019 show. Last year, the show offered a grand total of $7,540 in premiums.

Judge for The All American Junior Jersey Show on Saturday, November 9 will be Brady Core of Salvisa, Ky. He was the show’s associate judge in 2017. That year he also judged the Appalachian and Tennessee State Fairs as well as the Indiana State Fair Holstein Junior Show. Other shows he has judged include the Indiana and Ohio Junior Jersey shows, Dixie National Junior Roundup and the Tillamook County (Ore.) Fair, among others. This year he will also be officiating at the Dixie National Livestock Show.

The first and second place winners in each class of these shows will become the 2019 All American and Reserve All American honorees of the American Jersey Cattle Association.

For information on show entry fees and deadline, visit www.livestockexpo.org.

For over 150 years, the American Jersey Cattle Association has maintained identification and performance records for dairy herd owners and delivered services that support genetic improvement and greater profitability through increasing the value of and demand for Registered Jersey™ cattle and genetics, and Jersey milk and milk products. For more information, contact the American Jersey Cattle Association by writing 6486 E. Main Street, Reynoldsburg, Ohio 43068-2362, visit USJersey.com, or connect at Facebook.com/USJersey.